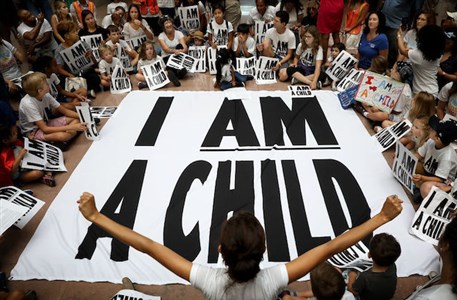 “I find it increasingly challenging as an African American man to take in these new bits of information—these new traumas that show and highlight the violence upon African American people,” stated Rev. Hubert Ivery, pastor of Geneva Avenue UMC in San Francisco and incoming chair of the CNUMC Advocacy and Justice Committee. Ivery spoke up during a recent Facebook Live webinar on Juneteenth, Friday June 19 sponsored by his committee. “The basic human rights of brown and black people are still in jeopardy.”

The webinar entitled, “Covid-19: Impact on Incarcerated Children & Youth,” was part of a response from the 2019 CNUMC commissioned Task Force on Criminalization of Children and Youth to research and present findings to members of the conference.

“We organize people of faith to protect the rights, dignity and well-being of immigrants,” explained King. For example, through seven years of vigils, her movement’s actions resulted in the closure of the West County Detention Center in the Bay Area. The current work involves increasing the visibility of the Adelanto Detention Center,  supporting advocacy to stop the expansion of immigrant detention centers, and freedom campaigns.

The movement’s framework is threefold: mending the past, healing the present and transforming the future. First, the movement addresses the root cause of institutional racism that “forms punitive incarceration and detention systems and racially scapegoats’ people of color and immigrants,” said King. The second way they are helping is to ‘heal the present’ as they liberate and accompany people most impacted as well as advocating for policies to dismantle oppressive systems.

“We must harness our faith values … we need a vision to move forward,” said King, quick to note the important last step is to take the movement to a transformational third level. “Envision the future and create the beloved community.”

What’s happening right now? The movement is involved in advocacy for the release of all in detention centers, honoring the dead, calling for accountability, setting up short-term housing in congregations and an emergency Migrant Fund. There are three campaigns underway: 1) Dropping Life Without Parole (LWOP); 2) Ending Privatization of Prisons; 3) Stopping the collaboration between ICE, Jail and Prisons.

“It’s one thing to understand or even sympathize with a person,” said guest speaker Charles “Buja” Joseph who was released from prison to be immediately taken by ICE to a detention center for 11 months before being released by a Federal judge’s order. His cause is still needing support by faith groups in the Sacramento area. “To truly feel it brings awareness that a pain exists…”

Guest panelist, Angela Brown is a UMC deacon assigned as the Minister of Community Engagement, Advocacy and Justice working with local churches in the Bay District. Her hope is for people to see and become aware of the crossovers between the educational and criminal justice systems as well as the role that disparity and equity issues play.

“These things are all interwoven,” said Brown. “There is no aspect of our lives that isn’t touched by it.”

“If we continue to allow systems and institutions to treat children as disposable disruptions, labeled as problems to be managed instead of children to be cherished—what does that say about the shallowness of our faith?” asked Brown. She addressed the statistics and concept of the school-to-prison pipeline where children of color are three times more likely than whites to end up in the criminal system rather than graduate from high school or go to college. Brown addressed the “Zero Tolerance” school policy that takes away the authority to reduce consequences to fit circumstances and thus increasing excessive suspensions and expulsions--criminalizing students.

“What are people of faith doing to ensure that school systems, police departments and policymakers do more to honor and celebrate the humanity of black, brown and indigenous children?” added Brown. “What are we doing to build a system that shows grace to all children, not just some?”

“It is clear, for me, as incoming chair,” said Ivery, “that I’d like to see our churches be in a better position to mobilize and bring about change in their community—in respect to racial justice and justice as related to migrants and youth.”
This year, the task force has hosted other presentations. One featured a discussion on militarism and corporate collaboration with Nick Buxton, writer and communications manager of the Transnational Institute.

“These live presentations and webinars are part of the dynamic process to educate ourselves and others,” said Rev. Michael Yoshii, pastor of Buena Vista UMC in Alameda and moderator of the webinar and current chair of the Advocacy and Justice Committee. “It is a way to engage people and to find other resources in our conference that we may not know about, a public forum to create networking.”

The task force is currently revising a 25-page document as part of its’ 2020 Annual Conference report.

“It will be a substantial statement,” said Ruth Stacy, retired legal researcher/writer for the State of Nevada and current member of the task force. Stacy noted that the committee will be looking for other places to get the information out to the conference including additional webinars.

“I am hopeful that this report can generate conversations and collaborations—it is all interrelated,” said Brown.

“Part of our work [was] to contextualize our study process affirming our geographical diversity, while making it relevant to conference members and congregations,” says Daugherty. “Our hope is to also lift up ministry stories within our conference and draw upon the wealth of expertise and efforts that already exist.”

If you are interested in activism, especially if you are a white person, Rev. Ivery recommends the following additional Intercultural Communication references:

The Little Book of Biblical Justice: A fresh approach to the Bible’s teachings on justice by Chris Marshall;

Can We Talk about Race? by Beverly Daniel Tatum

Doing Justice: Congregations and Community Organizing by Dennis a. Jacobsen

Racing Across the Lines: Changing Race relations through Friendship by Deborah . Plummer

We Can’t Talk About that at Work! How to Talk About Race, Religion, Politics, and other Polarizing Topics, by Mary-Frances Winters