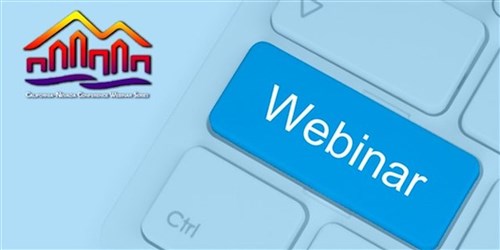 Editor's note:  Wednesday Webinar will be on holiday next week for Thanksgiving. Please join us on December 2nd when we will discuss planting churches in the midst of a pandemic. Click here to register.

“It would be manageable if it was one child…” stated Gloria Fearn, one of the facilitators for the Wednesday Webinar on November 18, 2020 entitled, “Decriminalization of Children and Youth.” Fearn reflected on the the Zoom break out group discussion she led that focused on the magnitude of children suffering across the world and in local communities. Fearn added, “… it is really a systemic problem.”

More than 45 people attended the event including individuals seeking to grapple with the issues for the first time as well as those who have studied this topic and been actively involved for many years.

“Wherever you are on the spectrum of knowledge and learning and practices, we want to honor your presence here today,” stated Rev. Michael Yoshi, retired pastor and member of the CNUMC Task Force on Criminalization of Children and Youth (TFCCY) sponsoring the webinar. “And want you to know that all the questions you may have are welcomed and valued; and also, that any information that you have to share, or resources or knowledge base that can help us advance this work together, is welcome.”

The task force showed “Let the Children Come to Me,” a video summarizing the task force’s detailed written report to the 2020 Annual Conference Session (ACS). Participants were put in small group break out groups to discuss the impact of the report findings. Because ACS was held virtually, this was the first opportunity for the task force to engage in a dialog about the report.

Nine groups were formed. Feedback ranged from “being overwhelmed” to “eager to talk about it.” Some groups noted that their churches might not want to get involved with these issues because they might seem controversial while others shared ways their churches were involved, wanting to find more ways to help.

“It was a good conversation,” said facilitator Connie Hunter. “When we look at that video—our hearts go out to these kids--this is really wrong and awful, but “What can we do?” and “Who can help us do something in response to improve the situation for the children?”

One group discussed the biggest challenges to acting might include not being aware, becoming paralyzed by an inability to prioritize needs, avoiding controversy because of a fear of losing community and lacking resources.

Going beyond talking, the task force unveiled a website with resources for local churches and individuals to become educated and get involved at the click of a mouse.

“How do we get beyond talk and get to action? Service is great but how do we advocate?” asked task force member Patricia Daughtery as she displayed the new webpage at https://EndCriminalization.wordpress.com

The page contains the task force’s detailed report, video, study and resource guide. Under the tab “Faith in Action,” there are suggested ways to take action on current legislation including “click here” links to write to your local representative.

The page also contains the personal stories of the children and youth referred to in the video report. The site has a link to The United Nations Convention on the Rights of the Child, as well as the report on “The Intersection of the Military-Security Complex with the Prison-Industrial Complex  and the Impact on Children and Youth.”

At the bottom of the page is a tab linked to “Theological Reflection and Discussion Questions” as a resource for church groups exploring faith-based concerns alongside social justice. There are links to other webinars and video presentations, too.

Daugherty emphasized the need for individuals and churches to collaborate, make partnerships and build relationships.

“Compassion came out of relationship building,” stated Daughtery. “and in that to be able to listen and build relationships with the people affected by racism, poverty and by different forms of oppression … as well as building partnerships between congregations and each other, faith and secular—the Good Samaritan didn’t do it alone.”

“The way we change a system is by educating and advocating, and churches are wonderful places to do that,” stated Fearn. “Advocating doesn’t have to be a contentious process; it can be something that grows from the experiences of our people.”

The group shared other resources including an upcoming a screening of the film "Pushout: The Criminalization of Black Girls in Schools." This documentary film was inspired by Dr. Monique Morris' book of the same name. The screening will be followed by participatory discussion groups, a response panel and a call to action. This webinar is part of the ongoing United Methodist Women series on interrupting the school-to-prison pipeline. The film will be shown Tuesday, December 8, 2020 from 6-8 p.m. REGISTER HERE.


In 2019, the task force was created by The Advocacy and Justice Committee which serves as a connectional bridge to the General Board of Church and Society (GBCS) www.umcjustice.org for the California Nevada Annual Conference.

“The task force work has examined the interconnectedness of the nature of incarceration of children and youth in different contexts around the world and particularly the ways that systemic racism and systemic evil undergirds these practices,” added Yoshi encouraging churches to read the detailed reports. “We’ve also researched how military prison and security industries profit off of the expense of children and youth.”

“I am convinced that we need to take on these kinds of issues as a church,” stated Rev. Sharon Delgado, retired pastor, “… because of the teachings and example of Jesus, and because our motivation comes from the Holy Spirit and this goes against God’s will and the compassionate spirit of God.”

“Although my heart is broken, I am so proud because my church is willing to look at these difficult things,” stated another participant. “The church is not ignoring it. There’s evil out there and we’re actually wrestling with it and I’m glad.”

“What can I do?” asked moderator Dr. Reginald Nichols, Director of Leadership Development, as he closed the webinar. Nichols referred to the focus scripture for the November webinars of the parable of the Good Samaritan in Luke 10:25-27. “Like the Good Samaritan on the road, there is something you can do, even if it is for one. It makes a difference in the lives of many.”

To reach out to members of the CNUMC Task Force on Criminalization of Children and Youth (TFCCY):  IP.TaskForce@cnumc.org