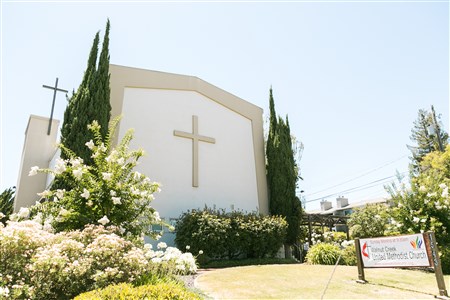 Instant Connection editor’s note: As The United Methodist Church prepares to debate its position on LGBTQ rights in a special session of General Conference next week, a California-Nevada congregation has been recognized in a secular media article for its progressive stance. An excerpt of the excellent article appears below, with a link to the full version.
By Lou Fancher, Correspondent
Walnut Creek Journal
February 8, 2019
Page 3
On Sunday, when staff, the congregation and visitors celebrate the 150th anniversary of Walnut Creek United Methodist Church — the actual anniversary is Tuesday — a mandate to love all people will be foremost. 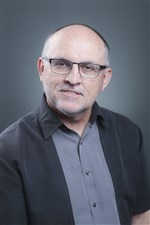 “The first thing we pride ourselves in is that we are an open church,” says the Rev. Colin Kerr-Carpenter, or Pastor Colin, as he is known by church members. [at right]
He was appointed senior pastor in 2017, arriving from a position in Orland, California, near Chico. As a sixth- generation Californian with 30 years in ministry and degrees from University of the Pacific and the Boston University School of Theology, Kerr-Carpenter most appreciates the church’s progressive social outreach.
“Theologically, we believe the No. 1 understanding of the gospel is that we’re called to love and to love all people.”
That core principle, affirmed by a 79 percent favorable vote taken June 5, 1994, designates the church as a “Reconciling Congregation,” which means all people, regardless of sexual orientation or gender identity, are welcome to participate fully in church operations, missions and life.
Joining a movement begun in 1982 by a church in New York City — and adhering to policies that continue to roil the United Methodist denomination — Kerr-Carpenter says his reading of church history shows the decision was not made “willy-nilly.” A careful study of the issues involved, regular meetings to educate the congregation and other preparations over three years preceded the final vote.  Read complete article here.