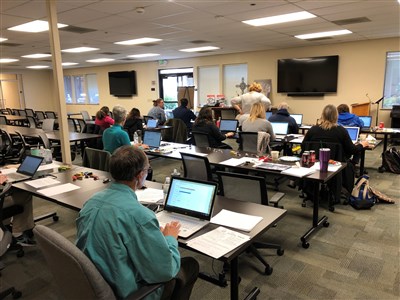 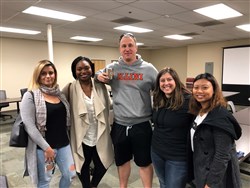 On Saturday, Dec. 1, around 20 volunteers responded to an appeal by the California-Nevada Conference’s Disaster Response Ministry and showed up at the United Methodist Center in West Sacramento, to lend their data entry skills to the Camp Fire recovery effort.

Early in the day one of the volunteers, Claremont School of Theology seminarian Crystal Floyd, put out a call to her Active 20-30 Club network and several members (above left) showed up in less than an hour and worked for a full four-hour shift. 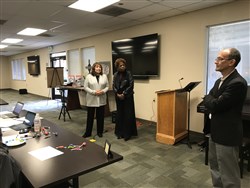 Bishop Minerva Carcaño, Conference Lay Leader Micheal Pope, and Conference Director of Connectional Ministries Jorge Domingues (at right) were attending another meeting in the building and stopped in to bless the volunteers and pray over their efforts.

In the course of the day 1,113 intake records of Camp Fire survivors were entered into a database, to facilitate the process of identifying specific needs. Now, Conference Disaster Response Director Sonja Edd-Bennett says, other volunteers are beginning to make follow-up calls in anticipation of entering the recovery phase of disaster response.