By Cate Monaghan
Interim Director of Communications, CA-NV Conference of The UMC

It was two years ago this week that a series of 250 wildfires erupted in Northern California and spread so quickly – owing to severe fire weather, or “red flag,” conditions – that each had swallowed up from 1,000 to 20,000 acres within a single day. The Northern California firestorm, North Bay Fires, and Wine Country Fires would consume some 245,000 acres, claim 44 lives, and destroy nearly 9,000 structures before being contained, becoming the costliest group of wildfires in state history at the time.

As survivors of the 2017 wildfires reflected on the anniversary, red flag conditions were again the focus as the state’s three major investor-owned utilities responded to warnings, watches, and advisories from the National Weather Service by proactively cutting off power to more than 800,000 households across California – most of them customers of the embattled Pacific Gas and Electric Company (PG&E)*. 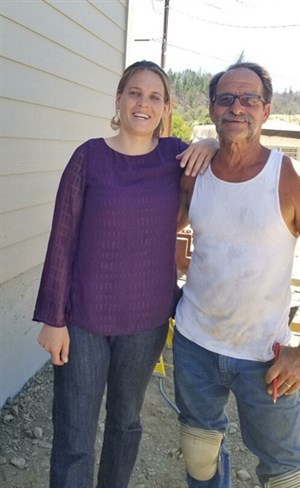 “It definitely brings up stuff for people, yeah,” acknowledged Danielle Rodrick Juszczak, Mendocino County volunteers coordinator for the Disaster Response Ministry of the California-Nevada Conference of The United Methodist Church, who lost two members of her husband’s family in the Northern California wildfires. (She is at right, at a work site with her husband.) Her position is funded by the United Methodist Committee on Relief (UMCOR).

“I hear a lot of anxiety because of timing of the power off. We had a community dinner that was really nice, and we’ve had moments to reflect online, but what you hear a lot of, is you know, anxiety, worry because of the power off and the red flag warning. And the … Lake County sheriff used the wording, 'We’re going to have 70-90 mph winds, similar to 2017 fires.’ So that was like a huge trigger, because we had never experienced anything like that before, and now you’re saying it’s going to happen again, and the power’s being shut off, which is an uncertainty that we’re not familiar with, so it just was these little triggers for people.

“There is that part of it and then there’s another part I noticed, for the people that lost family: They’re not really as accepting to hearing people complain about power off, if you know what I mean. They’re like, ‘You’re complaining about your power getting shut off, that could potentially save lives? I lost my family, you know, like, a couple of years ago when they didn’t shut it off – like, I’m not really willing to listen to that.’”

When we spoke on Wednesday Rodrick Juszczak reported that power was off at her home but still on at the distribution center she operates. PG&E had warned that customers could expect outages to last for five days. 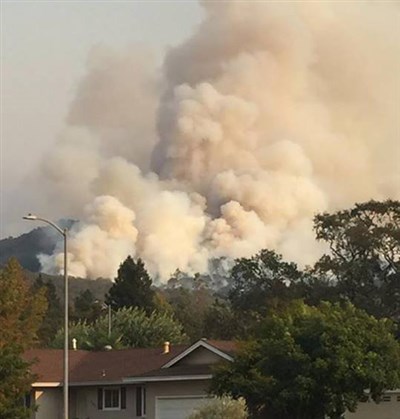 “It’s better than losing your house,” noted Cheri Kraus, finance director for the California-Nevada United Methodist Foundation, who lives in Santa Rosa in Sonoma County (left). “Luckily I still have power, but literally 500 feet away they don’t.”

Kraus is thankful that her home was spared in 2017, too.

“We didn’t lose our house or anything like that [but] ... the fire got to be within about 500 yards. So yeah, it was a little dicey for a little bit.”

Rev. Blake Busick, district superintendent for Cal-Nev UMC’s Great Northern District, reports having “a strange feeling” on the morning of October 8 (Tuesday) when the red flag warnings were issued and power shutdowns began.

“Truthfully I wasn’t really thinking much about [the anniversary] until then … two years to the day and it’s the same day we had those terrible winds, strongest that I can remember ever being there, and then getting that warning … it did trigger a sense of reflecting back on that time, and actually, we even went through those few days again, kind of replayed the whole thing again.”

In 2017 Busick (below right, at groundbreaking for Community UMC in Lower Lake, which burned down in a 2016 wildfire) also lived in Sonoma County, where he served as pastor of First UMC of Santa Rosa. 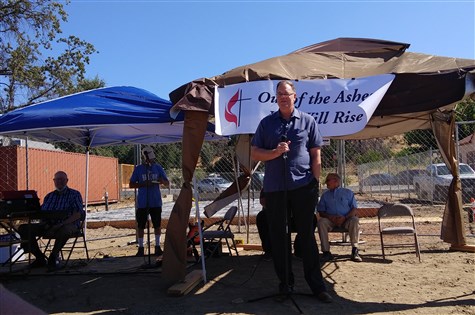 “We went to bed on Sunday night and then ... the wind was howling like, you know, couldn’t believe … tree limbs and everything down … [and] in the middle of the night, [my wife, Peggy] smelled some smoke and she thought maybe we left a candle burning or something, so I actually got up in the middle of the night and checked and then went outside and realized that there was some fire somewhere; didn’t think anything of it, you know, our power was out … so I got in my car and kind of went to see and I couldn’t find anything, so I went back to bed, and then ... about two in the morning or so, a neighbor comes pounding on our door, yelling at us to get out.”

Busick’s parents live with him and his mother is paralyzed.

“So, we got her out of bed and got her in her wheelchair and ... got out, and by the time we were leaving there was burning embers kind of landing on our roof. And so, we were pretty disoriented at that point as we were driving to the shelter … We didn’t know probably how close the fire was, or how significant it was, at that point.

“Like everyone else, at two in the morning – we just got ourselves out of there. Luckily Peggy grabbed the cat.

“And we didn’t get any warning; there was nothing we heard, from a phone call or from anything else … so we were lucky just for a neighbor who comes, you know, banging on the door.”

Busick said they eventually made their way to the church, where, by 5 a.m. a full breakfast was laid out for the 700 or so people sheltering there. It was a few days, he says, before satellite photos confirmed what they suspected – that their house had been destroyed.

“We were pretty sure,” he says,” ‘cause we knew the fire came through there. There were a couple homes that survived it, just, you know, randomly – but most, almost everything was gone.”

In 2017, Kraus and her husband took in friends who were evacuated, and their friends – six people and two dogs in all. They were there for 10 days. The experience, she says, created an indelible bond.

“Our neighborhood is much closer; we all kind of keep track of each other a lot more than we did before,” she says.  “And it’s – you do remember it, but like I say, luckily we weren’t as affected as some other people. For probably – I’d say at least a month – if you smelled smoke or heard a siren, really it was almost like you had post-traumatic stress: You were, ‘Where’s it coming from? What’s going on, what’s happening?’ But for me, you know – I remember it, but I’m okay. Now, my husband’s got a couple of friends that they’re really still going through it; neither one of them are back in their houses yet, so for them it’s a lot scarier. But for us, it was just kind of – it was nice, because we knew who our friends were, and they knew they could count on us.” 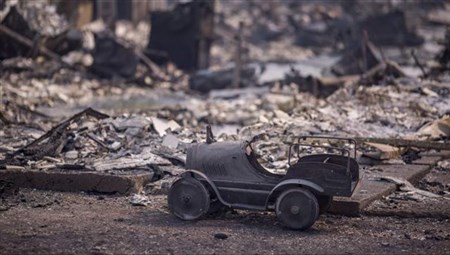 For Busick, the two-year anniversary also has been easier than for others, he believes, and credits that to the fact that he no longer lives in Santa Rosa.

“I think people who are ... still living there in the midst of the rebuilding and everything else … yeah, I think it’s a little bit more traumatic to go through that and to have that – to have it raised again.”

While a red flag warning remains in effect for most of California through today, PG&E has begun restoring power in areas it deems safe and reports it has 426,000 customers (58%) back on line, with 312,000 customers remaining. The utility says it has more than 6,300 personnel and 44 helicopters engaged in, and supporting, patrols and inspections. According to PG&E, crews visually inspect every mile of lines, looking for potential weather-related damage to lines, poles, and towers – and isolating and repairing any damage – before beginning the “energization process.”

Cal-Nev Conference Director of Disaster Response Ministries Sonja Edd-Bennett contacted UM churches in the counties affected by the power shutdown this week and reports that some opened their doors to be “charging stations,’ while others were preparing to assist if people were without fresh food. She asked all churches that responded in some way to let her know, to aid the planning for future emergencies.

The two wildfires currently burning in Northern California are at 30% and 95% containment. In Southern California, the Saddleridge Fire broke out this morning in Sylmar, torching 4,600 acres. No containment has been reported.


*PG&E filed for bankruptcy in January 2019 after being blamed for more than 1500 fires since 2014. It has accepted the finding that its transmission lines ignited last year’s Camp Fire, the deadliest and most destructive fire in state history.