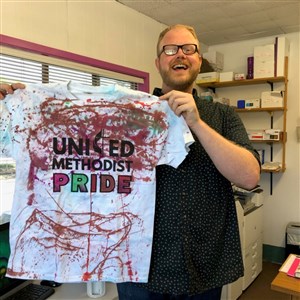 “We are coming together to let people know we are inclusive and loving congregations,” says Doug Treadwell, chair of the Welcoming Team at First United Methodist Church in Sacramento, who spearheaded the coordination of 11 area UMCs to march together in this Sunday’s Pride parade.
“What drove our interest [to participate] was the support of the Western Jurisdiction, and other UMC churches in the United States and Europe … in clarifying that our denomination is not unified in supporting the Traditional Plan.”
The Traditional Plan, approved at the Special Called General Conference in February of this year, retains language in the Book of Discipline holding that homosexuality is “incompatible” with the teachings of Christianity – but also expands the definition of "self-avowed practicing homosexual" to include those “living in a same-sex marriage, domestic partnership or civil union”; prohibits conference boards of ordained ministry from approving candidates not meeting ordination standards regarding sexuality; prohibits bishops from consecrating, commissioning or ordaining self-avowed homosexuals; and imposes more stringent penalties – including termination of credentials for a second offense – for clergy who are convicted of performing same-sex marriage ceremonies. 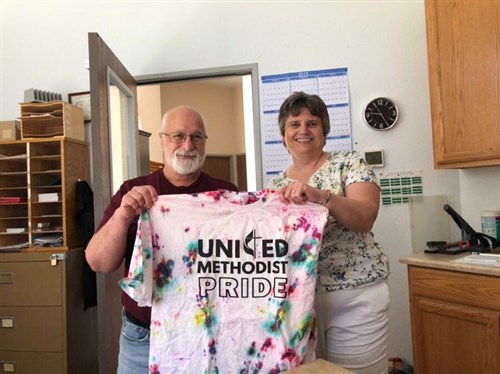 Treadwell (at left, with Rev. Joan Pell, pastor of Sierra Pines UMC) anticipates more than 180 United Methodists will join the march.
“The churches that came together [to march] want to continue to cooperate to do reconciling and social justice work.
“I think that is the most important thing that happened in this effort – to continue working together,” he adds.
Churches participating include those from as far west as Davis UMC and as far north as Sierra Pines UMC in Grass Valley. Also participating are Elk Grove UMC; Fair Oaks UMC; First UMC, Roseville; First UMC, Sacramento; First UMC, Loomis; Rancho Cordova UMC; St. Andrew’s UMC, Sacramento; St. Mark’s UMC, Sacramento; and The Table, Sacramento. 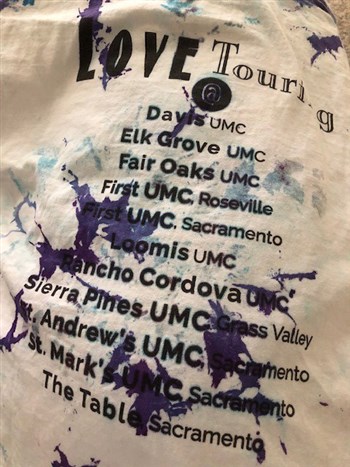 United Methodists who signed up are receiving a customized tie-dyed T-shirt with the slogan, “UNITED Methodist PRIDE,” to be worn as they march. The T-shirts were a combined effort between an anonymous artist, FUMC Sacramento, and St. Mark’s UMC (St. Mark’s designed the backside with the slogan, “LOVE Touring,” above all the church names).
The two-day Sacramento Pride (SacPride) Festival takes place this Saturday and Sunday, June 8 and 9, on the Capitol Mall between 3rd and 7th Streets. The parade begins at South Side Park (between T and 8th) – gathering by 10:30 a.m. and kicking off at 11 a.m. Participants will march down 10th to the Capitol Mall.
The churches will have several booths at the festivities on both days to share their message.
Three years ago, Treadwell used a website to find gay-friendly churches and found First UMC, Sacramento. “We wanted to find a worship community that we were accepted in,” he explains, adding, “What I love about the Methodists is that they put their love to work: We do what Christ taught us to do, and I feel part of a family there. When we say, ‘All means all,’ we mean it!”