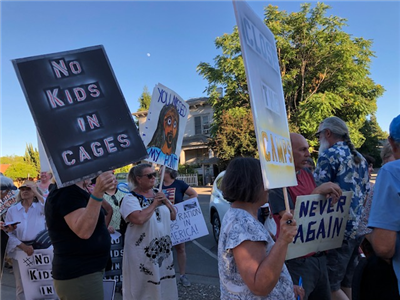 "I think that it is important for people of faith to take a stand that is consistent with the values that we learn from the Gospels, from Jesus, and from our faith traditions," said Sharon Delgado, a retired United Methodist pastor from Nevada City, while standing alongside other protestors on Friday, July 12 during Lights For Liberty: A Vigil to End Human Detention Camps, at the Yuba City County Jail in Marysville, California – the last remaining detention center in northern California. It houses 170 detainees, including women and children.

"I am here because I think it is really important to stand up at a time like this when immigrants are being so maltreated and so targeted, and are so vulnerable to attacks of every kind – especially on Sunday [July 14] being threatened with attacks ... and the way the children are being held, that families are being held, even people seeking asylum are being treated completely unjustly," added Rev. Delgado [at right below speaking with Sara Tillema, Campus Minister at UC Davis], who also has been executive director for Earth Justice Ministries, an interfaith organization, for more than 20 years. 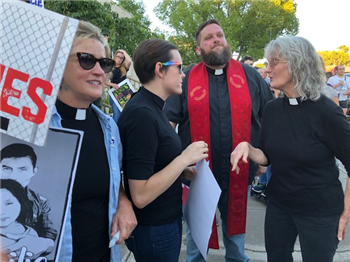 As more than 450 people gathered in front of the jail in Marysville, with chants heard up and down the street echoing, "Resist, Protect, Love," there were  817 other vigil events being held throughout California and across six continents (see complete listing at www.lightsforliberty.org/localevent). All the vigils were led by local immigrant activists, organizers, impacted people, multi-dimensional coalitions, and/or faith leaders, according to the Lights For Liberty coalition, which tracks participation and organization of the events. The vigil in Marysville was co-sponsored by 12 area groups, including NorCal Resist, the founder of which – Pablo Reyes Morales – was one of the main speakers.

Rev. Rollie Loomis welcomed participants and led singing and a moment of silence during the event sponsored by FUMC Roseville outside their church building. More than 120 individuals were present as the group, including an elderly church member in a wheelchair, lit candles and spontaneously sang, "This Little Light Of Mine." 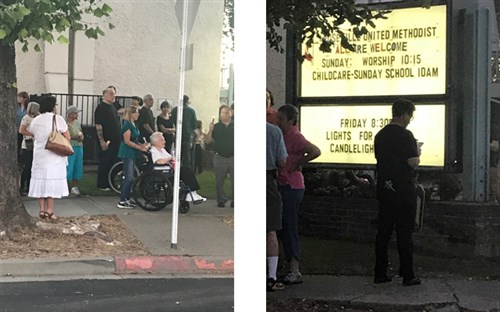 "It was an uplifting event – not negative, no trash talking – it was all about being wrong and needing to stop," said Renee Tefft of Elk Grove UMC, whose daughter is a member of the Roseville church and was the reason she attended at that location.

"I was invited and I was interested in the cause and wanted to raise awareness," added Tefft, who also serves as database coordinator for the California-Nevada Annual Conference of The United Methodist Church. She reported that the event attracted honks and waves from those driving by on the busy street. Most participants were church members, but some were not. One woman saw the church billboard announcement and brought her two children to the event to start their activism journey.

"Estimates are that we had between 500 and 1000 people attending at any one time," said Rev. Katie Goetz, who spoke, along with church member Diana Reddy [shown below], who is on the Redwood City Council. Highlights of the event included members of the Sequoia High School Dream Club speaking and the "Raging Grannies," an activist group of grandmother-aged women, singing. 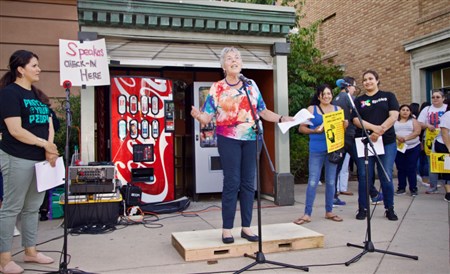 "Gracious God, from the time of Abraham and Sarah you have called your people to be pilgrims. You have called them to new homes. You have called them from places of oppression and danger into places of freedom and safety," Rev. Goetz prayed that night as an interpreter translated the words into Spanish. "Tonight we ask that you transform our country into such a place. And we vow to be co-creators with you of such a place. We commit to working to stand up to injustice and oppression, and standing for migrants here in this community, at the border, and around the world. Amen."

A tweet sent this week from LightsForLiberty reads, "We are profoundly grateful to all our local and national organizational partners, and have heard from many of you about the desire for future events and mobilizations. We stand with you now and always and will have more announcements soon. We love you all. Thank you."