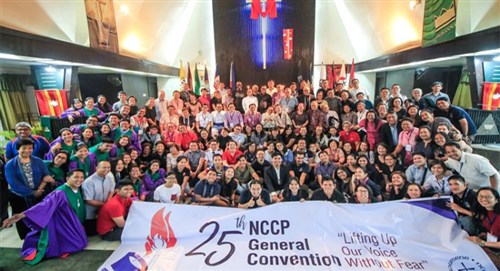 The National Council of Churches in the Philippines (NCCP), at its 25th General Convention, has affirmed the November 6, 2019 statement, “Standing Up for Loving God and Serving Our People,” that was issued by NCCP’s officers regarding the “red-tagging” of the Council.
That statement decried “the baseless and unfounded inclusion of its name in the list of 'front organizations of local communist terrorist groups (CTG)’” by the Philippines’ Department of National Defense (DND), and reads, in part:

The NCCP is an ecumenical fellowship of Protestant and non-Roman Catholic churches, united in faith in Jesus Christ and faithful in the mission of accompanying the Filipino people towards the Biblical vision of a life in all its fullness (John 10:10). Since its founding in 1963, the NCCP has been grounded in Christ’s mission, providing the churches with opportunities for common witness and responding together to the needs and concerns of the people. It is committed to unity and reconciliation and the promotion and protection of human rights. It works with churches and communities, impartial of their religion or beliefs, in order to deliver dignified humanitarian aid and other social services to the people, especially to the least of its sisters and brothers.

The officers’ statement was affirmed by the 102 delegates to the convention, representing the member churches and associate members of the National Council of Churches in the Philippines (NCCP) in various parts of the country.
The United Methodist Church is a member of the NCCP.
The convention further resolved to seek a dialogue with the Department of National Defense and/or other appropriate government bodies concerning the red-tagging, and resolved to call on its international partners to enjoin their governments to advocate before Philippine authorities, asking the Philippines government “to desist from formulating and issuing such lists in the context of its counter-insurgency program.” NCCP also asks that the governments of its international partners advocate for the promotion of peace, unity, and reconciliation in the Philippines.
Read the NCCP statement
The National Council of the Churches of Christ in the USA (of which The United Methodist Church is also a member) issued a press release on November 7, expressing “the greatest alarm and concern” and calling the government red-tagging an “outrageous and unacceptable targeting … reminiscent of the repression during the darkest years of the Marcos dictatorship.”
Read NCC press release