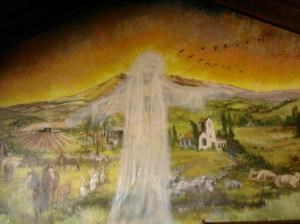 On February 23, 2020, Byron United Methodist Church will hear the story of the unique mural which covers the 18-by-20-foot front wall behind the church’s altar. On May 3, 1981 the colorful mural was dedicated, depicting the valley to the east of Mt. Diablo, where Byron is located.

Joe Sabad commissioned a local Delta artist, Rose Roskin, to paint something appropriate for the inside front wall of the Byron church. Little did she know that the design she planned had also appeared in a vision more than a year before, according to Sabad.

In 1980, Joe Sabad was driving in Antioch, and a bluebird flew at his car. His heart beat fast, and he drove himself to the hospital in fear of a health crisis. There he was admitted for high blood pressure. He imagined the arms of Christ stretched out to him.

Rose Roskin designed her painting with a figure of Christ overlaying the Byron valley. In the mural is a prominent bluebird. She gave the painting the name, “In Christ’s Hands.”

The Byron UMC congregation is proud of this mural. Some members do not like it when it is covered with a purple drape in Advent and Lent. February 23 is Transfiguration Sunday, just before the drape covers the mural for six weeks, to be revealed again on Easter.