CCUIR Reflection: Gathering of the Orders Conversation with Imams 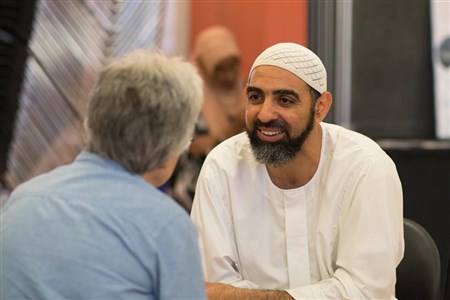 Note from CCUIR:  January and the Gathering of the Orders seem lifetimes ago with all that has been going on in our nation and the world. Nevertheless, there is never a better time than now to remember the ways we are connected and to learn from and be inspired by one another. The California-Nevada Conference Committee on Christian Unity and Interreligious Relationships (CUIR) offers you Tara’s reflection on our workshop in which we were honored to host Imam Said Jawad Sajadi and Imam Sayed Hadi Yassin.

As an offering of thanksgiving for the Imams who shared their time and faith with us during the Gathering of the Orders, I would like to share with you the teachings that I found to be exceptionally beautiful about their Shia Muslim faith. My hope is that my notes captured their teachings accurately, and ask forgiveness for any misunderstandings.

As they opened their talk and spoke about Love and mercy for humankind as being the most important things according to their faith, it felt like they were sharing profound truth; truth I too know.

They shared that in the Quran, it says we are created for the purpose of getting to know each other; for coexistence with diversity. Therefore, the Quran encourages people “of the book” (Abrahamic faiths) to sit down together to talk about similarities!

I felt ashamed to recognize that they honored diversity, yet many Christians, even some Methodists, have no equivalent desire particularly toward those of the Muslim faith. Over and over again as they shared details about their faith and practice, they kept coming back to the importance of love and honoring the ‘other’. This extended to animals and creation as well.

While regulations are a significant principle of their religion, consideration for the other still came first.

For example, they have 4000 regulations on how to pray 5 times a day, but they must ask permission in a person’s home before praying there, so as to not offend the homeowner. They believe that God will not forgive them if they purposely violate the rights of others. To help another is seen as better than anything; even better than 100 pilgrimages to Mecca!

I hope that as I share these lessons with you as well as my friends and parishioners, that it not only counters the hate and fear in our society directed toward Muslims in particular, but also encourages us to listen and learn with humility, as God has much to teach us when, as the Quran teaches, we can coexist with diversity.