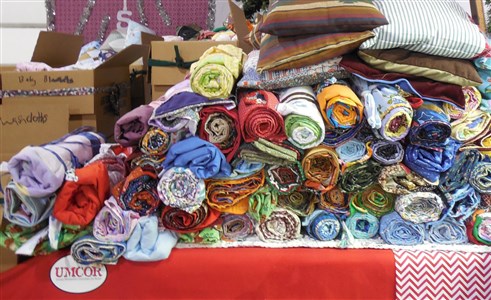 Over the past 10 years UMCOR Depot West has received mission groups and volunteers from every single state in the West and has even welcomed groups from as far away as Iowa, Texas, and Maryland. UMCOR’s Relief Supply ministry (which includes UMCOR Sager Brown in Baldwin, Louisiana, along with affiliated warehouses in six other states) relies on volunteers to build, shelve, and distribute relief kits to those affected by natural disasters in the United States.

“As a connectional Church, we know that – together – we can make a difference in the most vulnerable and displaced populations,” says the Rev. Brian Diggs, associate director of UMCOR West.

“It has been a powerful decade of vital ministry [here], and we look forward to the next decade of service,” he adds.

Typically, demand for openings in spring, summer, and fall has been so high that groups wishing to volunteer at UMCOR West during those times had to book approximately one year in advance. During the spring and summer of 2019, however, a number of weeks are still open. Diggs says the depot would love to fill those weeks with enthusiastic volunteers eager to serve those in need by acting as the hands and feet of Jesus in a broken world.

UMCOR West provides a clean and safe work space that can accommodate large or small groups, Monday-Friday. Moreover, it’s a great place to engage in an intergenerational mission experience, Diggs notes, as all ages are welcome. Volunteering at UMCOR West also provides the unique opportunity to engage in a powerful way with the prevailing religious culture of Utah, as UMCOR West volunteers work with The Church of Jesus Christ of Latter-day Saints in Salt Lake City on a weekly basis.

For information about food, lodging, and other important details about the UMCOR West volunteer experience, click on the link below and then click on the pastel green “Know Before You Go” box, located on the right side of the webpage.