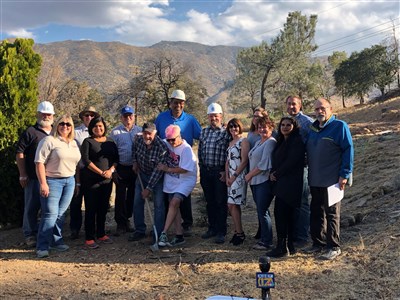 More than two years after losing their home in the Erskine Fire, last week a Kern Valley couple was finally able to see a brand-new dwelling start to take shape on their land.

“June 2016 changed the landscape of our valley,” said Justin Powers, who chairs the Kern Valley Long Term Recovery Group, at the official groundbreaking Oct. 22nd. “We lost 285 homes and the journey from there has been a long and arduous one.”

The recovery group was formed almost immediately after the fire had eaten its way through the valley. Shortly thereafter, the United Methodist Committee on Relief (UMCOR) set up a case management team.

“UMCOR, right after the fire happened, they came in and they trained us, to tell us, ‘here’s how you do case management; here’s how you deal with the hundred-plus families that you have, to try to work with them to try and get them to a state of recovery – and they also provided funding for our amazing case manager,” Powers said.

According to Sonja Edd-Bennett, Disaster Response Director for the California-Nevada Annual Conference of The United Methodist Church, Lucy Hernandez “caught the eye of a few people” as being the right person to lead the families impacted by the disaster through their journey to recovery. When the fire happened, Hernandez just threw things in her car and hit the road to try to help, Edd-Bennett says. UMCOR found her among the volunteers.

“When we come into a community we try very hard to hire case managers from within the community, or from among those that are already helping,” Edd-Bennett explained at the groundbreaking, adding, “She really has been the glue.”

UMCOR’s funding was set to expire in August, but by then Mennonite Disaster Service (MDS) was also partnering with the long-term recovery group. What MDS does is to build houses from the ground up, with the community only paying the cost of materials. It’s more cost-effective than moving families into mobile homes, which the recovery group did for 27 families earlier on.

“UMCOR and the Mennonite Disaster Service often partner together,” Edd-Bennett said at the job site last week, “and so … I went back, and said, ‘we’d like to keep Lucy on longer, and the Mennonites are building, and we want to help support that financially,’ so UMCOR said, ‘absolutely.’” Funding was continued to the end of the year, and UMCOR added approximately $30,000 for unmet needs for the current build and one other.

Kern Valley is economically challenged, and has never had to deal with a disaster of this scale, according to Powers – nor has Kern County itself. “None of us know what long-term recovery looks like for a disaster of this size,” he said, thanking UMCOR “for providing us with a paid case manager who’s been able to really bring the whole operation together and move it forward.

“Without UMCOR we wouldn’t be here today.”

Edd-Bennett says it’s all about sharing hope. “I was looking earlier, up there, and a gentleman was wearing a shirt that reads, ‘Rebuilding Hope,’” Edd-Bennett said at the groundbreaking ceremony, indicating the hillside where the Mennonites had already begun construction, even before the official turning of the dirt to launch the project.

“We are hopeful that this project and the rebuilding of these homes – and bringing a new awareness to the needs within Kern County and within this area – will restore hope, will bring a new and a fresh hope. That’s why we do what we do, because we’re here to share hope.

“The Erskine Fire has not been forgotten,” she added.

If you’d like to be involved in the rebuilding effort, Edd-Bennett says a few people with construction and/or painting skills are going to be needed at the Kern Valley site, the week of Nov. 11th. Contact her at sonjaeb@calnevumc.org if you’re interested in volunteering.

Watch KERO-TV’s video of the groundbreaking ceremony here. Sonja Edd-Bennett’s remarks are at 15:00.