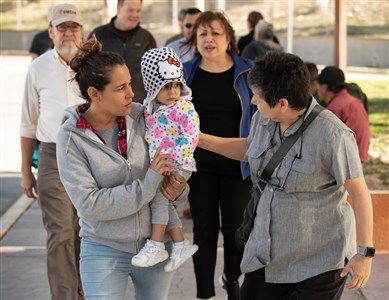 United Methodist churches in San Francisco are on alert in the face of Immigrations and Customs Enforcement (ICE) raids reportedly planned for this weekend. UM News quotes the Associated Press as saying the immigration sweep would target 10 major cities, including San Francisco.
“We have now learned that ICE will be conducting raids in multiple cities, including ... Atlanta, Baltimore, Chicago, Denver, Houston, Los Angeles, Miami, New Orleans, New York, and San Francisco,” Bishop Minerva G. Carcaño wrote to the episcopal leaders in the other affected areas. “The raids are expected to start this coming Sunday. ICE will be targeting individuals with final orders and unaccompanied children who have 'aged out.’ ICE is expanding their targets,” warned the bishop, who chairs The United Methodist Church Immigration Task Force.
Faith organizations across the United States are planning a vigorous response.  Churches are being asked to participate in a response effort called Sacred Resistance, being managed by The UMC’s ecumenical partners at Church World Service.
According to the Sacred Resistance website, “When a house of worship signs up to be part of this Sacred Resistance they are agreeing to open their doors in times of rapid response events in the case of raids or deportations … If your congregation is not prepared to be on the public sanctuary list, you can add your name to a non-public list to be provided on a one to one basis to immigrants' rights organizers doing deportation defense work.
“This would be a temporary commitment, not to be confused with providing long term Sanctuary for individuals ... fighting their deportation order.”
Bishop Carcaño and the Rev. Staci Current, Bay District Superintendent, are in an attitude of prayer and preparation, willing to assist any of the California-Nevada Annual Conference’s eight San Francisco churches that agree to participate in the Sacred Resistance. As of this writing Rev. Current had received commitments from Bethany UMC and Temple UMC.
Meanwhile, the bishop says all the conference’s churches are invited to be “in prayer and on alert in case their direct involvement is needed.”

In another show of support for refugees, some Cal-Nevada churches and congregants are participating in Lights for Liberty: A Vigil to End Human Detention Camps, taking place worldwide tonight in protest of the inhumane conditions with which refugees must contend.
“Asylum is a human right,” asserts the Lights for Liberty Facebook page. According to its website, Lights for Liberty is “a coalition of people, many of whom are mothers, dedicated to human rights, and the fundamental principle behind democracy that all human beings have a right to life, liberty and dignity.”

The coalition, in partnership with “international, national, regional and local communities and organizations who believe that these fundamental rights are not negotiable and are willing to protect them,” has organized 780+ candelight vigils worldwide, taking place in the Pacific time zone from 8:00 to 9:15 p.m. tonight (Friday July 12). Thousands of people are expected to participate.
First UMC of Roseville will host a vigil and another will take place on the west steps of the California State Capitol in Sacramento (no open flames are allowed on Capitol grounds; participants will need to use phones, small flashlights, or battery-operated candles to provide illumination). Other vigils are scheduled to take place at detention camps across the country, and in neighborhood streets and front yards, to protest the inhumane conditions faced by refugees.

The Immigration Task Force is calling attention to the following resources:
Know Your Rights Red Cards from the Immigrant Legal Resource Center. “All people in the United States, regardless of immigration status, have certain rights and protections under the U.S. Constitution. The ILRC’s Red Cards help people assert their rights and defend themselves in many situations, such as when ICE agents go to a home.”
You can download and print these cards at home, in multiple languages – English, Spanish, Arabic, Chinese, French, Hmong, Vietnamese, and Korean. These cards are free for non-profits.
Home Raids Posters, Know Your Rights flyers, and other resources from IDP (Immigrant Defense Project). You can print these resources in multiple languages, including English, Spanish, French, Punjabi, Haitian Creole, Mandarin, Tagalog, and more.
(Read related UM News story, Immigrant in United Methodist church fined $214,000)