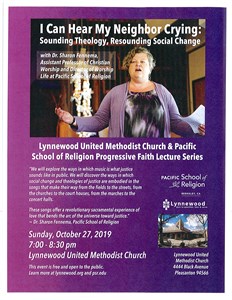 Next month Lynnewood United Methodist Church will begin a new partnership with Pacific School of Religion (PSR), seeking to advance progressive religious values and thought in Pleasanton, California through a series of lectures – one of which includes an interactive singing workshop.
The inaugural lecture in the series, “I Can Hear My Neighbor Crying: Sounding Theology, Resounding Social Change,” will be given by professor Sharon Fennema and feature an interactive singing workshop. It will take place on Sunday, October 27, beginning at 7 p.m., in Lynnewood UMC’s sanctuary.
Referring to the workshop, Dr. Fennema said, “If justice is what love looks like in public [Cornel West], then in this presentation we will explore the ways in which music is what justice sounds like in public. We will discover the ways in which social change and theologies of justice are embodied in the songs that make their way from the fields to the streets, from the churches to the court houses, from the marches to the concert halls. These songs offer a revolutionary sacramental experience of love that bends the arc of the universe toward justice.”
Dr. Fennema is currently Assistant Professor of Christian Worship and Director of Worship Life at PSR, having served as lecturer on Ritual, Liturgy and Preaching at Harvard Divinity School from 2011 to 2013. Her primary research interests are queer theory, gender studies, and religious practices; critical theories and worship; ritual studies and social theory; and sacramental theologies. Dr Fennema holds a Doctor of Philosophy from the Graduate Theological Union in Berkeley; a Master of Arts in Religion from Yale Divinity School and Institute of Sacred Music; and a Bachelor of Music from St Olaf College.
The second lecture, on the immigration crisis, is planned for spring 2020, featuring PSR President, Rev. Dr. David Vásquez-Levy.
According to the press release announcing the lecture series, Lynnewood UMC is a welcoming and reconciling congregation with a legacy of compassion and intellectually engaged Christian spirituality in the community and world. PSR is the oldest Protestant seminary on the West Coast, with a 153-year tradition of preparing theologically and spiritually rooted leaders to work for the wellbeing of all, both within and outside of religious contexts.
Download flyer here.