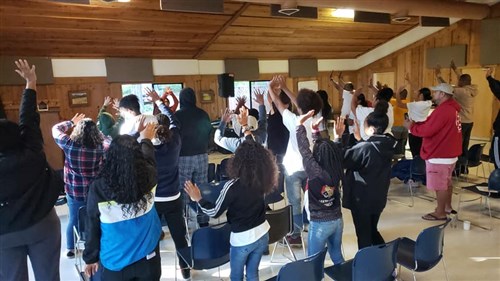 The Fijian Caucus Youth Camp (FCYC) is the brainchild of the California-Nevada Conference’s Fijian Caucus, which organized the first one in 2016. It was held that year at Silver Spur Christian Camp. This summer, the fourth annual edition of the FCYC took place at Camp Lodestar in Wilseyville. Thirty-nine campers, representing five United Methodist churches in Sacramento, Palo Alto, and Stockton, attended the June 25-28 camp, along with 21 facilitators.

The theme was “Call to Me,” based on Jeremiah 33:3 which reads, “Call to me, and I will answer and I will show you great and mighty things which you do not know.” Guest speakers shared various facets of the theme – among them Rev. Fel Cao, Cal-Nevada Conference director of Camping and Retreat Ministries and Young People’s Ministry; Revs. Langi Lolohea and Monalisa Lolohea of the California-Pacific Conference; and Rev. Sekove Veisa, Cal-Nevada's Fijian resource minister, who is on secondment from the Methodist Church of Fiji. Also speaking were Semi Lalama Leweniqila of Centennial United Methodist Church and Tevita Koroi, pastor at First San Rafael UMC and chair of the camp committee.  Seru Vatuwaqa, who led worship at the 2019 Annual Conference Session, was a part of the worship team. 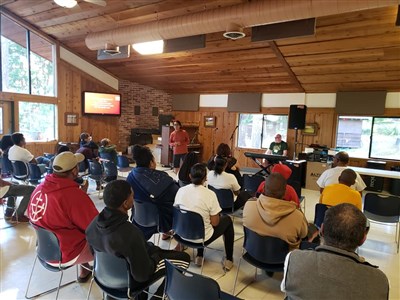 The camp program included a variety of activities aimed at maximizing the youths’ time in order to make the camp spiritually enriching, educational, and socially and culturally challenging as well as fun and exciting.

“The recreation facilities provided by the camp and the camp setting did add to the atmosphere and the success of this year’s camp,” said Koroi. “As camp facilitators, we felt that a lot has been learned, as evident in their feedbacks, through the campers’ responses during their group works, skits, and round table exercises, [and] through their camp evaluation.”

The camp evaluation gave the event overall a high rating, as it did many other aspects of the camp, such as worship sessions, cultural reflections, formal sessions with speakers, and recreation times and activities.

“Of course, a few campers wanted the camp to extend for a few more days,” Koroi noted. Overall, Koroi summed up the response as very positive.

“Our campers this year have indeed returned home gaining much knowledge of Christ’s words as shared in this year’s theme, ‘Call to me,’ with a better understanding that God is waiting for us to call upon Him for all that may require.”

The FCYC was grateful for all the support and the assistance provided by its partners, including the General Board of Global Ministries – through its Pacific Island Ministry Plan, for the grant allocation and camp supplies; Cal-Nev Youth and Young People Ministries (YYPM), for grant assistance that secured the 2019 camp site and provided Safe Sanctuary training for camp facilitators (and for Rev. Cao’s participation); and the Conference Commission on Religion and Race (CCORR) for its grant assistance toward providing music instruments for use by the youth.

“This year was the first time in four years where we were able to worship at our camp with our very own musical instruments,” reported Koroi, thankful for the CCORR assistance that made it possible.

“Also, we would like to acknowledge our congregations and churches who assisted us with donations/grants as part of our camp costs. For this we value the contributions and support from Centennial UMC in Sacramento and Wesley UMC in Sacramento, as well as those churches who sent their young people to be a part of this year’s camp … and the others who have helped us in many ways, including our family members.”

Koroi mentioned that after camp, there were campers who were interested in continuing the experience by attending other youth camps. More than five campers went on to attend a national inter-denominational youth camp that is held every four years in Kansas City, Missouri, from the 10th to the 14th of July.

As for plans for 2020, the camp is expected to be held again in June. Look for further details on the caucus Facebook page at fjy19 now, and look for content to be loaded on fjy20.