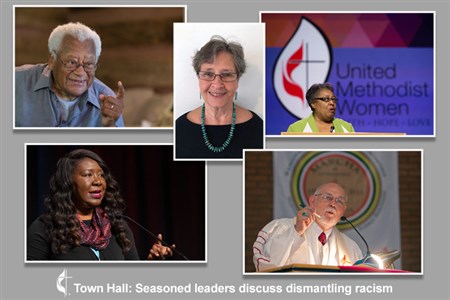 United Methodists need to “get off the sidewalks” and engage directly in the campaign for racial equality, said Bishop Joel N. Martinez, during the second of several virtual panel discussions on racism.He cited Dolores Huerta, co-founder of the United Farmworkers Union, about the need to be politically involved.

“Sisters and brothers, we can either stand on the sidewalk as bystanders and let the forces … have the day or we can get off the sidewalk and march into justice history,” said Martinez, a retired United Methodist bishop and social justice activist who served in the Nebraska and San Antonio episcopal areas. “We cannot give up the hope.”

The Aug. 19 broadcast on the United Methodist Communications website and Facebook page was part of a series of denominational town hall meetings held to discuss eradicating racism. Also taking part were retired United Methodist pastor and civil rights leader the Rev. James Lawson; Sue Thrasher, co-founder of the Southern Student Organizing Committee; and Clara Ester, a deaconess and vice president of the United Methodist Women Board of Directors.

The panelists agreed that Black Lives Matter is a continuation of the 1960s civil rights movement.

Lawson said he encountered “professional looters” and “police provocateurs” during the 1960s who worked to undermine the civil rights movement, and said the same forces are in play during Black Lives Matter protests and marches.

Violence during recent protests in Portland, Oregon, Seattle and other cities was the product of police and federal law enforcement agents “actively engaged in provocative behavior hidden underneath a movement” and not the fault of the Black Lives Matter movement, he said.

Race issues have come to the fore in the U.S. because of highly visible deaths of African American citizens at the hands of law enforcement. Among them was George Floyd, who died while in the custody of Minneapolis police officers May 25 after an officer pressed his knee into Floyd’s neck for more than eight minutes.

That incident illustrated just how far civil rights struggles still are from fruition, said Ester, an advocate for social justice and dismantling racism. Ester was a witness when the Rev. Martin Luther King, Jr. was shot on April 4, 1968.

“The issues have not been resolved,” Ester said. “The good thing about now is that this country is ignited around this movement (against) racism that has existed in our country for years and years. This is the right time to jump in as a United Methodist denomination and say, ‘Enough is enough.’”