'Out of the Ashes': Community UMC in Lower Lake Breaks Ground 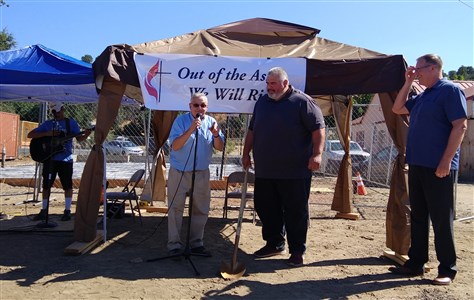 Community United Methodist Church in Lower Lake, CA burned down during the Clayton Wildfire in 2016. Finally, on Sunday, August 11, 2019, ground was broken for a new building.
“Out of the ashes, we will rise” proclaimed a banner as Great Northern District Superintendent Blake Busick, Pastor John Pavoni, and Lake County Supervisor Moke Simon led the groundbreaking ceremony.
The main church building, the parsonage, and the classroom building were lost in the fire but, “We haven’t missed a service,” the pastor says proudly. On the first Sunday after the fire, since no one was allowed into the area, the congregation met at Community UMC in Clearlake – but each week thereafter, services have been held in the Lower Lake church’s social hall.
(While the social hall remained intact, it was later discovered that its roof tiles had been so heat-damaged that they crumbled when walked on, requiring the roof to be replaced.)
A food pantry was relocated to a container that the church refurbished – adding insulation, electrical, exhaust fans, and refrigeration. From it, volunteers distribute food to those who need it twice a week, only missing one week of service because of the fire: “We have been stepping right along; we haven’t let it tear us apart,” Pavoni says. 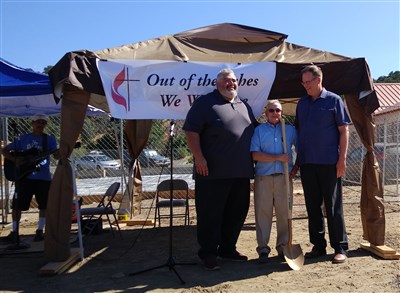 It was nearly a year before the parsonage could be rebuilt, and the insurance that paid for that did not fully compensate for the loss of Pavoni’s personal belongings and car. Getting construction underway on the church itself has taken much longer, mainly due to understaffed county offices, Pavoni says. With six major fires in five years that destroyed more than 2,000 buildings, the county’s planning and building offices have been unable to keep up with the necessary workload, he explains, adding that it took close to 15 months to get through the permit process alone.
Nor is that the end of the church’s difficulties. Insurance restricts rebuilding to the original square footage, but the county and state of California now require “thousands of dollars in upgrades”: Among them side aisles, fire sprinklers, and special water access for the fire department that is separate from the church’s plumbing. The church also has been required to upgrade from one bathroom to two, with two stalls each.
“We do have some fundraising ahead of us. I don’t know how we’re going to be able to do it because it’s a very small community; we lost a third of our population,” the pastor says. “In [the Clayton] fire we lost 300 buildings and the homes were gone, and there were only around 700 to begin with."
According to Pavoni around 70% of the population displaced by the fires has not returned to Lower Lake – in some cases because there’s no place to rent, and in others due to permanent relocation.
The church’s congregation has likewise dwindled. At around 60 on Sunday before, “now I’m lucky if I get 25,” Pavoni says.
The size of the congregation means ongoing money woes. Pavoni says the church couldn’t afford the cost of heat and air without looking to alternative energy sources, so he’s exploring the possibility of switching to solar panels and a power wall. However, the initial outlay for those enhancements is costly. He’s hoping to locate grant money to help pay for them.
“I’m learning a lot, from being a pastor, I’ll tell you!” he says ruefully.
Construction on the new building is expected to be completed in January or February 2020. Pavoni notes that the church has 130 years of history behind it, dating practically to the colonization of the county, and he expects its ministry to persevere.
“The people that were here for the first 130 years laid a good foundation of community development and being a part of a community, and it’s our hope that we continue [that tradition],” he says.