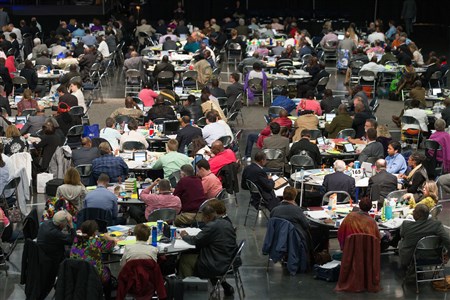 With COVID-19 still menacing the globe, organizers are exploring various options for holding what many expect to be a pivotal General Conference.

Among the possibilities is for The United Methodist Church’s top lawmaking assembly to convene online in late summer of 2021.

The Commission on the General Conference has named a technology study team to look at ways to accommodate full participation of nearly 900 voting delegates and other church leaders who come from four continents and 13 time zones.

The stakes are high for those planning the legislative session. General Conference delegates face multiple proposals to resolve longtime debate over homosexuality by splitting the denomination along theological lines.

“This group has been assembled from across the church and includes people who have demonstrated experience in the intricate workings of The United Methodist Church at many levels,” said commission leaders in answer to UM News questions posed Sept. 17.

An advisory team of General Conference volunteers and contractors will assist.

Some United Methodist leaders, including bishops, have urged General Conference organizers to consider holding the meeting virtually, while others have raised concerns about accessibility for delegates who come from countries where internet service is often unreliable.

Of the 862 delegates elected to the coming General Conference, 55.9% come from the U.S., 32% from Africa, 6% from the Philippines, 4.6% from Europe and the remainder from concordat churches that have close ties to The United Methodist Church.