Love Knows No Borders: A Moral Call for Migrant Justice 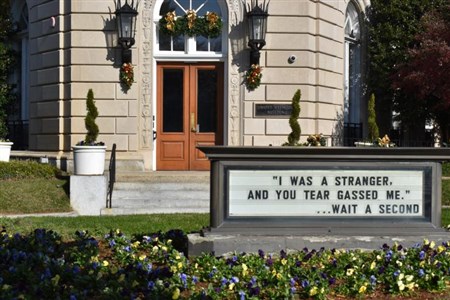 
The General Board of Church and Society (GBCS) of The United Methodist Church is joining in a National Week of Action for Migrant Justice, organized by the American Friends Service Committee, Dec. 10-18, to stand in solidarity with the migrant exodus and all who seek refuge and asylum in the U.S.

“Together, we are calling on the U.S. to end the detention and deportation of immigrants, respect the human right to migrate and seek asylum, and end the militarization of the border,” writes Rebecca Cole, Director of Organizing for GBCS.

Bishop Minerva G. Carcaño says, “We are engaged in this effort as United Methodists.”

The National Week of Action for Migrant Justice will commence with a Day of Action in San Diego, CA on Mon. Dec. 10, where more than 100 faith leaders from all over the country, including Bishop Carcaño and other leaders from the California-Nevada Annual Conference, will take part in a nonviolent direct action at the U.S.-Mexico border in San Diego, California.

The event will kick off a week of actions in communities across the U.S., calling for an end to border militarization and for humane immigration policies that respect the rights and dignity of all people.

“I would hope that our Justice and Compassion Mission Focus Area and our Immigration Task Force would also consider ways to engage our entire conference in participating in some way,” Bishop Carcaño says. “Dec. 18 is International Day of the Migrant. Churches could be asked to include a prayer for migrants on any Sunday between now and Dec. 18, or could be invited to organize a public prayer vigil in their community on Dec. 18 or another day that works for them. Families [also] could be provided a simple prayer booklet, with a prayer for each day Dec. 9-18,” she offers. “There are excellent resources about immigration on our denominational links.”

Cole says the GBCS team has worked closely with the United Methodist Immigration Task Force in connecting with UMs on the ground in both Mexico and the US border.

“We’ve tracked the activity of the migrant exodus through Mexico to the US Border, connected with Methodist ministries in Mexico, and along the U.S. border from San Diego, California to Brownsville, Texas,” she says, adding, “Many thanks to all who have reached out with passion and commitment for a United Methodist response to the migrant exodus at the border. In solidarity with those seeking refuge, we invite you to join us by participating in one of the following ways." (Download list here)

A sign outside GBCS’ United Methodist Building in Washington, DC, provoked a story by Newsweek magazine.

A play on the text of Matthew 25:35, the sign is intended to show a disconnect between Jesus’ words and recent actions by US border control agents, according to GBCS Interim Director of Communication Warren Gill.

"We must welcome the stranger,” Gill told Newsweek. “There were barefooted babies at the U.S.-Mexico border this weekend, and the U.S. government threw tear gas at them. It’s shocking, and it’s immoral."

Rodney Scott, chief patrol agent of the San Diego Sector Border Patrol, defended the decision to use tear gas to CNN, on the basis that officers were being threatened; he said he saw people throwing rocks rather than asking for asylum.

GBCS advocates de-funding Customs and Border Protection completely – along with Immigration and Customs Enforcement (ICE) – explaining that migration is presented by the Bible as an on-going human phenomenon, “not as a crisis to be managed or a policy problem to be solved.”

“God’s seeking, saving, healing, and liberating grace is at work in and through migration stories. God is on the move with migrants (Exodus 13:21), accompanying them on their journey and calling them to new life in new places,” the agency emphasizes, and states, “National budgets are moral documents. They are a testament to national priorities. May it be that such budgets invest in life-giving and life-sustaining priorities – indeed, the things that make for peace."

"The Crowning of the Year" – poem by Jack Amick, Director of Sustainable Development and Global Migration, UMCOR