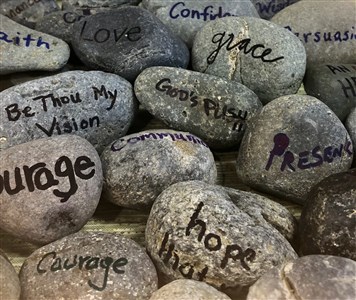 Los Altos United Methodist Church (LAUMC) hosted a workshop on The Changemaker Initiative at this year’s Gathering of the Orders in Modesto.

Senior Pastor Rev. Kathi McShane, along with Lay Leaders Kim Jones and Melissa Allison, spoke to 40 inquisitive clergy about this new approach to discipleship that took place at LAUMC during 2018.

The workshop included insight into LAUMC’s decision to partner with the global non-profit organization Ashoka to launch a 10-month experiment in a new way of being church: Connecting the compassion of Jesus with the skills of social innovation. This was a fresh way to put faith into action.

The Changemaker Initiative chose 25 Fellows (ages 12-72) who had a passion to make positive change in one of four areas:

The Fellows committed time and financial resources to participate and pursue a project utilizing faith and Ashoka’s four (4) key components of changemaking: Some of the problems tackled included Loneliness and Lack of Community, Veterans in Prison, Human Trafficking, Technology Addiction, Gun Safety in Communities, Teen Anxiety and Depression, issues with Aging and Dying, Homeless LGBTQ Youth, and Bridging Church and Community through Artists. In addition, other areas of church incorporated the ideas of “changemaking” into their lessons – including Sunday School and VBS. Watch video below.


Rev. McShane shared LAUMC’s decision-making process and the intentionality of the church congregation; Initiative Director Kim Jones shared how the Initiative worked and what was learned and accomplished; and Melissa Allison shared her personal story of recently coming to Methodism and of what being a part of the Initiative has done for the deepening of her faith.

Highlights of what LAUMC learned in this first year of the Initiative included: Of note during this inaugural year is that 80% of the Fellows found it to be a new way to talk about their faith and their church with others; 50% report changing their prayer habits or taking on a new spiritual practice because of it; and some projects have garnered media coverage and/funding from outside sources. Personal transformation and social transformation are indeed happening!

The partnership with Ashoka has concluded and LAUMC has gleaned so much from this past year that will enable The Changemaker Initiative to grow and evolve in 2019. Plans for this “beta" year include developing a curriculum, hosting another cohort of Fellows, and collaborating with other churches and clergy.