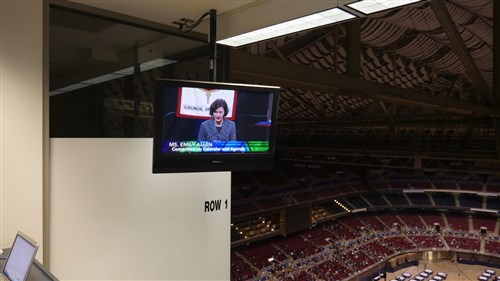 By Cate Monaghan
Interim Director of Communications, CA-NV Annual Conference of The UMC

One thing can be said about United Methodists: We know how to worship! After a year of planning for a General Conference designed to move the denomination forward from decades of painful dissent over the issue of human sexuality, delegates and observers to the special called session have lifted their hearts and voices toward the rafters in celebration of God’s faithfulness, praying that they themselves likewise will be faithful to their call.
Saturday was devoted to worship; and fervent entreaties to be open to the movement of the Holy Spirit – made during a powerful sermon by Council of Bishops President Ken Carter and rousing and inspiring music, led by Worship and Music Director Raymond Trapp – were made to launch the opening day of legislative work on Sunday.
“You are the cross and the flame,” Bishop Carter said, and the worship team responded with “You Are the Face of God.”
Following the service and a 30-minute break, GC Secretary Gary Graves introduced the legislative process, conducted roll call, and received committee reports. California-Nevada delegation co-chair Emily Allen, who was elected chairperson of the Agenda and Calendar Committee, reported to the body on behalf of that committee.
Bishop Christian Alsted was named presider of the first legislative session.
“We are not here to decide on an ‘issue’ or a ‘question,’” he said. “We are speaking about people, and the church.” The bishop said the conversation is about daughters, sons, nieces and nephews who identify themselves as LGBTQ, and how we as a body of Christ can respond to them.
General Conference is taking place in a football arena where teams battle each other to win, he noted, but said for these three days this is not a football arena, but a church: “And for these days a different set of rules apply, and I’m not speaking of Robert’s Rules of Order, but of the General Rules: Bishop Carter preached what this implies. Let the General Rules shape our conference. I believe that is what the United Methodists around the world expect of us, and I believe this is what Jesus Christ expects of us,” he said.
This special session was called by the Council of Bishops to receive and act on the report by the Commission on a Way Forward. Each plan that was referred to General Conference by the commission was reported on in depth, Sunday morning. Commission member Donna Pritchard of the Oregon-Idaho Annual Conference noted, “Some people thought our job was to pick a winner, but our charge was to explore new possibilities that empowered the connection. We had to choose – daily – not to close our hearts to the new thing God was doing among us.”
“Yesterday was an experience in the power of prayer in a new and profound way,” remarked David Field, a member of the commission from Switzerland. “Our continued prayer [as commission members] is ‘come, Holy Spirit.’”
“This work is now in your hands,” Bishop Carter concluded.
Bishop Hope Morgan Ward, episcopal leader of the Raleigh (North Carolina) Area, is the presider for the afternoon session.