Joyful Healer Celebrates 20 Years of Ministry on the North Coast 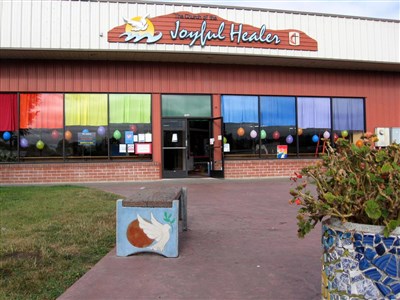 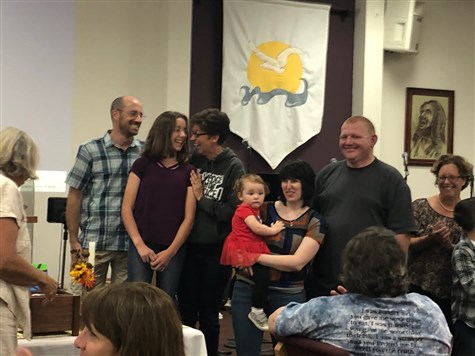 More than 60 people attended a special worship service on Sunday, September 8, 2019 recognizing 20 years of ministry for the church. Guest pastor Kathryn Dunning from Eureka UMC performed six baptisms – two adult, two youth, and two children, – and welcomed four new members who joined the church that day.
“I felt it was important to celebrate all that the Church of the Joyful Healer was doing,” explained April Sousa, the certified lay minister (CLM) who leads the congregation. “We, basically, are moving through a sort of rejuvenation from a few years ago when we realized we had to do things differently – without a full-time, fully ordained pastor. I felt we had some momentum and needed to celebrate.”
Worship featured a slideshow about the history and ministry of UMCJH and an open microphone time for individuals to share about the impact the church has had on their lives. Letters were read from those who could not attend, including some charter members now living as far away as Arizona and Montana. The event included a potluck meal and cake to celebrate the anniversary and Sousa’s reappointment. Commemorative bookmarks made for the occasion were passed out.
“You have been in my prayers for the whole 20 years,” said Rev. Rod Brayfindley, pastor of First UMC in Sacramento and founding pastor of UMCJH, in a letter read aloud to the congregation.
On Easter Sunday in 1999, after an advertising blitz, the first worship service was held and included members of the Arcata UMC who initially envisioned the new fellowship. 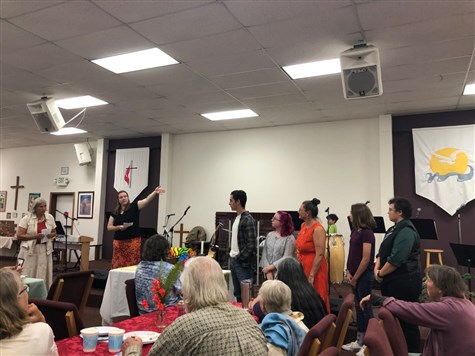 Over the next few months, Sunday attendance stabilized to an average of 55 per week. On August 1, 2004, the fellowship became a UM church when it signed its official charter. By the end of 2008, membership had peaked at 195.
At first, without an initial membership, the young faith community needed a lot of structural and financial support, which it received from the annual conference, district, and local church levels.
Locally, Arcata UMC actively supported the new fellowship by sharing several seasoned faith leaders, including Steve and Lorraine Carlson who, now retired and living out of state, sent an open letter to the church for the occasion.
“Before we got started, the Shasta District Methodist Missions (SDMM) – which served the equivalent function of the newly developed District Unions – dedicated half of each of their monthly meeting times to going over questions and issues related to the UMCJH and acted as trustees, staff parish, finance committee, and the leadership team,” reflected Brayfindley on the strong supportive role the SDMM played during the church planting process.
The growing congregation received grants from the Emerging Congregation Fund (ECF). It also received assistance through the conference New Church Development Committee (NCDC), that helped to secure additional financial support.
“We worked alongside Rod to do the significant investment in property and building programming,” recalled Rev. Tom Hillman, pastor of Burlingame UMC and chair of NCDC for 14 years during the time of UMCJH beginnings.
Even before the congregation had its own building, it was building homes for the poor in Mexico with Amor Ministries – traveling the thousand miles from the north coast to Mexico with tools and youth packed into two vans and  a trailer – a commitment it has continued every year since.
Once the fellowship had a permanent location to meet, it added an outreach ministry for youth by sponsoring and housing The McKinleyville Health and Karate Dojo. The fellowship also opened its doors to 12 Step groups and Scouting programs. One event it still sponsors is a Christmas event for younger children who make and wrap gifts for their parents and have a visit from Santa. Offsite, the church held a free annual community breakfast called Humor Therapy with guest comedians for many years.
Recently, the congregation added another ministry to its community outreach by hosting weekly Saturday Gatherings, a two-hour time for the homeless “to have a place to just be” and to receive a warm cup of coffee or tea and non-perishable foods. 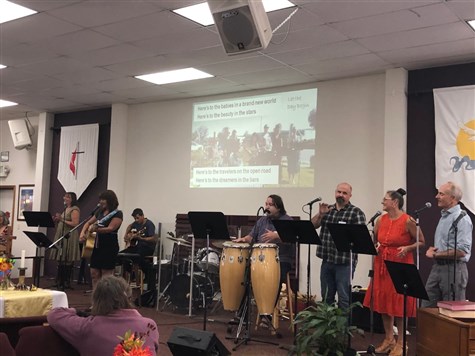 Rev. Steve Lundin, pastor of First UMC of Salinas and previous pastor at UMCJH, wrote, “Joyful Healer is the kind of faith community that is needed on the Humboldt coast – focused on grace – the unconditional love of God.”
Hillman noted that UMCJH’s ministries have come full circle by touching his own life recently. “I have been personally impacted by the ministry of the UMCJH as they’ve been supportive to an important person in my life.”
After 20 years, the UMCJH continues to focus on its initial mission, a statement painted on a wall in the entryway that reads:
“Encouraging Each Other on a Spiritual Journey to Know God Better, to Live Kindly and Healthily,
And to Do Something Beautiful for God in our Lives, our Community, and our World.”