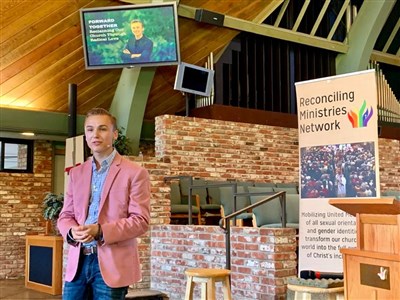 By JB Brayfindley
Communications Assistant
"My passion is for our church to stay together," JJ Warren said, while on a speaking tour in the California-Nevada Annual Conference.
The young, openly gay certified candidate for ministry – best known for the ardent speech he delivered on the floor of the 2019 General Conference – spoke at a worship service during Walnut Creek UMC"s celebration of its 25th anniversary as a Reconciling Congregation (RC) this month, and, "He shared hope," according to Walnut Creek pastor, Rev. Colin Kerr-Carpenter (at left in first photo below, holding balloon. Izzy Alvaran is on the right). 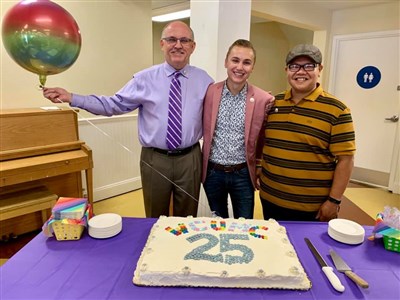 "God calls us to speak and be in uncomfortable places, to face our biggest fears and to say something, even if we don't think we have the right words to say," Warren said. "God calls all of us to say something, to go to people we might not think alike with, and to say something: To share our stories, to open hearts and minds ..."
He told about leading a Bible study at his college and witnessing to a young LGBTQ student who was rejected by her home church, reflecting on the ways God has used him to restore hope in others.
"We prayed for a girl who found her faith again – from a gay United Methodist. Isn't that what we're called to do? Help people feel the liberation and love of Jesus? To bring people into a new world, to be safe spaces and to be a safe church? If we're doing that calling as Queer people, how can [others] not see God in us? If we're bringing people to Jesus, isn't that what the church is supposed to do?" 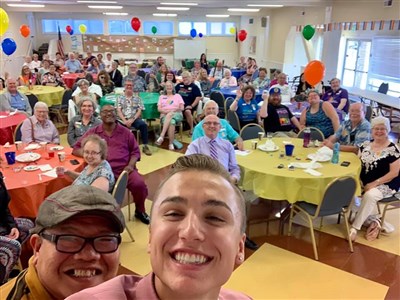 Warren stayed to participate in Walnut Creek’s festivities afterward, as well.
He was accompanied by Rev. Dr. Israel I. ("Izzy") Alvaran, Western Regional Organizer and National Process Organizer for the Reconciling Ministries Network (RMN). Based in San Francisco, Alvaran works with seven conferences spanning 11 states in the Western Jurisdiction. He also serves as a mentor for Warren and others who want to go through the ordination process.

Warren spoke at four UMCs while in California. One of them, St. Marks' UMC in Sacramento, hosted congregants from seven different churches, including some who drove from Lake Tahoe to attend. Among attendees at Warren's engagement at First UMC in Sacramento were a couple from Wesley UMC in Fresno, the first United Methodist church on the West Coast to become a reconciling congregation, 35 years ago.
Los Altos UMC hosted a live stream component to include participants who could not attend in person. Rev. Kathi McShane reported that the church has been an RC for more than 10 years, and that it re-enforced its commitment last year by hosting same gender weddings.
Warren recently founded Team Forward, a Reconciling Community of LGBTQ youth committed to LGBTQ justice and inclusion.
"It's time for us to set aside our fear of what might happen, to set aside our fear of what the general church might do, and to embrace our connection … to be the church which we envision today, together, and to move our church forward into that promised land of justice and inclusion for all people together," Warren exhorted during one of his messages in California-Nevada. 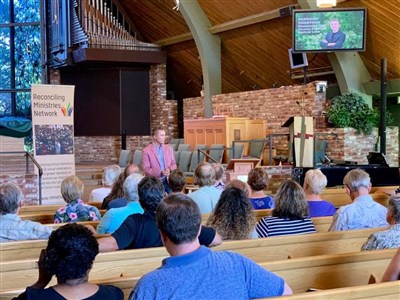 Although the California-Nevada Annual Conference has more than 90 Reconciling Churches and Communities – more than any other conference in the United States – Warren urged inclusive and progressive churches to "go beyond and embrace the connection and …  share our resources and our stories with those who aren't there yet, or those who are in places that don't allow them to be there yet."
"When I think about my home church in a rural area [of upstate New York], I wonder if all of those inclusive churches in the West [and] in the cities – if they all left us and took their inclusive voice, what would I have in my small town?"
During the question and answer time at Los Altos, participants asked how they could help and get involved. Among other ideas, including churches hosting workshops, Warren and Alvaran discussed the creation of a partnership program by the end of the summer for churches to find specific ways to help and share resources.
"This is something we talk about on our long drives," Warren said. "My hope is that it won't be just Izzy and I coming around to churches, but you all will be taking this message around."
His summer vacation speaking tour is titled, "Forward Together: Reclaiming Our Church Through Radical Love." A graduate of Sarah Lawrence College ('19) just outside New York City, Warren will be attending Boston University School of Theology in the fall and is the youngest member of the UMC Queer Clergy Caucus.