Gov. Newson refuses to give hospitality workers the right to return to work despite pleas from Interfaith Leaders from across California 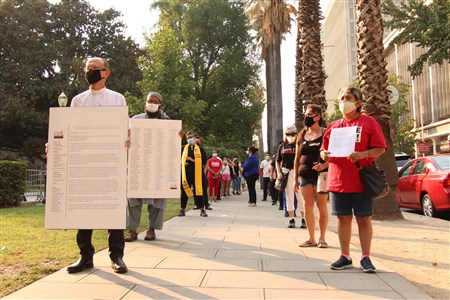 “Our hearts are broken, but our souls are not! Governor Newson, we will be back!” chanted the hospitality workers that staged a vigil for 10 days at the Capitol demanding the California Governor Gavin Newsom sign the bill AB3216, passed by the Assembly and the Senate. The bill would protect the employment of hospitality workers fired because of the pandemic by ensuring a right of recall and retention. It was awaiting his signature. Governor Newson vetoed the bill at the late hours of September 30th.

Faith leaders in California-Nevada and California-Pacific conferences came together with interfaith leaders across the state to support the workers’ action demanding the signing of bill AB 3216 into law. The organization Clergy and Laity for Economic Justice (CLUE) wrote a letter signed by more than 250 interfaith leaders from California and organized a 2-day prayer vigil held September 29th and 30th at the state Capitol. Clergy of different traditions came to the Sacramento to pray with the workers, express solidarity, and deliver the letter to the Governor.

California-Nevada Revs. Shinya Goto, District Superintendent, Fel Cao, Dir. Young People’s Ministries, and Jorge Domingues, Ex. Dir. Connectional Ministries, participated in the prayers and a breaking-bread ceremony for those who were fasting during those days. Rev. Domingues was the letter bearer to Governor’s representative, together with Muslim, Unitarian and Reformed faith leaders. He thanked the Governor for the many actions he has taken in support of working families affected by the pandemic, and asked that he “do the right and just action to protect these workers, some who have lost their work for months and have no lasting support for their families. This bill would give them hope to get back to work as our economy reopens.”

Pastor Bridie Roberts, from California-Pacific, who also works for Unite Here!, the hospitality workers union from Southern California, said that “many of these workers are undocumented and don’t have any assistance from the Federal government and limited support from the state. Many had family members who contracted COVID19. And we just heard that Disney will lay off 28,000 workers in California and Florida. We have some of them here with us. They are scared.” Ashley Gonzalez, Faith-Rooted Organizer from CLUE, said that the organization got involved with AB3216 because “the participation of clergy and lay leaders with those fighting for economic justice bring the strength of our community together with the workers.”

Several workers who have been unemployed for months told stories of their struggle and hopelessness. DS Goto, praying for the workers after they heard the devastating news of the Governor’s decision, said that “our God who has been at the side of the oppressed will not abandon you. He is listening to your pain and your suffering. He will deliver his justice. He will support your continuing organizing and fighting for justice. He is calling us to be in support with you. People of faith will continue to plead with the Governor for your just cause.”