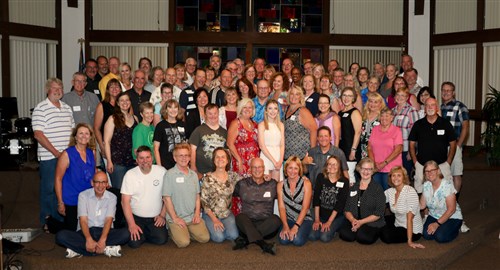 By Sue Schroeder Larson
Good Samaritan UMC
Ninety people from all over the United States gathered at the Good Samaritan United Methodist Church in Cupertino, California August 2-4, 2019 to celebrate the 50th anniversary of their high school Youth Fellowship (YF). These YFers – all now adults in their 60s – rejoiced in the opportunity to reconnect, sing, give thanks, worship, and cherish memories as they created new ones.
Their youth leader, Ernie Bringas, arrived at the church in 1969 and grew the group from a few dozen to 100 high school students within six months. Two years later he split the group into three nights, and the average attendance of high school students grew to 240, later peaking at 346. Eight YFers went to seminary and pursued careers in the ministry. 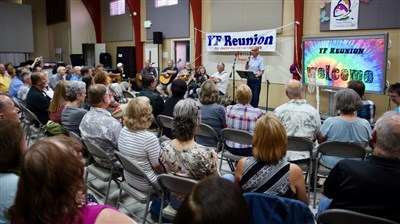 Bringas, now 79 years young, joined the returning YFers for three days of reunion festivities and led the re-enactment of a YF meeting on Saturday evening. Forty-three members of the old youth choir, the Good Sam Singers, sang in worship on Sunday morning along with a worship band of six.
Five of the YFers gave the message in worship, sharing their witness about how God changed their lives for the better through that 1969-75 youth group.
From the pulpit, Paul stated, “God did something miraculous at camp, and gave me eyesight like I had never had before … I looked at people without judgment, with love, and with appreciation.”

Sherry witnessed: “High school was a torturous time for me. I was harassed by a group of students on a near daily basis, called names, belittled, bumped and pushed … I walked home with a heavy heart most days. I was broken. YF was a place where I began to feel safe … I began to find and share my voice and felt heard … I began to relax and become open to the joy and hope and wonder with which I was surrounded in this place. I began to find myself.”
Jo shared: “I was welcomed to belong and was surrounded by a community of encouragers and people of great faith, and am blessed now to do things and be part of ministries I could never have planned or imagined.”
Dave told the congregation that he originally came to the youth group as an atheist and was swayed by the love everyone had for each other. “Ernie’s YF was designed to bring youth into the church, not just be a group for the kids that already went here.”
Sue closed the message time by saying, “Some people may have thought that I was somewhat popular when I was in high school … however, inside there was a loneliness and awkwardness that, like many teenagers, I did my best to hide and mask. In the fall of my junior year, a friend from my Spanish class invited me to YF. Because of that youth group, my life changed for the better in nearly every way. Most importantly, my faith in God and the recognition that God loved me really began here at Good Sam. That orientation, that bedrock conviction, has been the foundation of my life ever since, and it has made all the difference.”
Editor’s Note: Watch 2:04 video created by Ted Larson (Sue’s husband) to see the YFers “back then” and learn more about this extraordinary ministry.