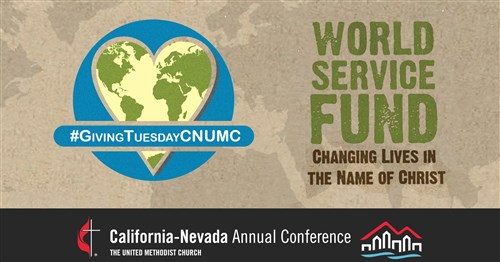 The Council on Finance and Administration (CFA) for the California-Nevada Conference extends its deep gratitude to those who contributed to the conference’s Giving Tuesday campaign this week.
The focus of the campaign, The United Methodist Church World Service Fund, helps actualize the church’s Four Areas of Focus:  Engaging in ministry with the poor, stamping out killer diseases of poverty, creating new places for new people while renewing existing congregations, and developing principled Christian leaders.
The people of the Cal-Nevada conference voiced strong support for the World Service Fund at annual conference session in June – but it is through the conference’s apportioned giving that such support is translated into something tangible. Because of that, CFA asked each church to catch up on its conference tithe in celebration of Giving Tuesday, while asking individuals to contribute generously.
Even though Giving Tuesday is past, the opportunity to contribute will remain open until the end of the year.
Four churches and forty individuals, including Bishop Carcaño, contributed a total of $5,580 on Giving Tuesday itself. Sixteen of the individual contributions were made on behalf of the giver’s church, which will go toward helping those churches meet their tithe.
Please consider joining the churches and individuals "voting with their pocketbooks” on Giving Tuesday to support the work done through the World Service Fund, through giving to the Cal-Nevada conference’s Giving Tuesday campaign. To those of you who gave and to those of you who will give, again, CFA thanks you!
Watch Bishop Carcaño’s Giving Tuesday video:
Visit #GivingTuesdayCNUMC to learn more. Watch video by Rev. Kristin Stoneking, chair of CFA.