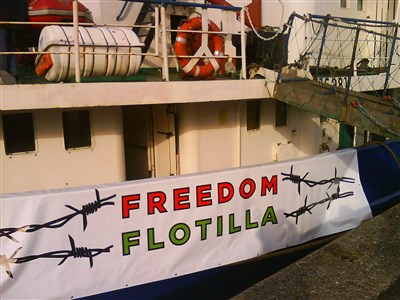 Wright who resigned from the U.S. diplomatic corps in opposition to the U.S. war on Iraq, was on the May, 2010 Gaza flotilla that was attacked by the Israeli military. She has organized multiple humanitarian boats to Gaza, challenging the 13-year Israeli imposed blockade and calling attention to the plight of the people suffering in what has been called the largest “open air prison,” Gaza.
Wright has also traveled to Iran as a citizen diplomat, participating in multiple delegations to that country.
The June 2019 CA/NV Annual conference overwhelmingly passed a resolution titled, Speaking Up for the Children of Gaza. This resolution appealed to congregations to study and discuss the plight of children in Gaza, who are in critical need of assistance. More than half the population of Gaza are children, one third of those under the age of five suffer from anemia and 12% face some kind of malnutrition or stunting.
This resolution also recommends that congregations and members consider supporting two UMC Advance Projects that address the needs of children in Gaza.
•Advance # 14908A A, Department of Service to Palestinian Refugees
DSPR is an arm of the Middle East Council of Churches that has been working with Palestinian refugees in Gaza since 1949, runs mother-child health centers that provide early interventions for at risk children and neonatal home visits for newborn’s, vocational training, and trauma healing programs.
•Advance # 629001, “Augmenting Food Production and Income in Times of Siege: Urban Gardens,” is a project of DSPR. It seeks to assist 250 households headed by women with the building of small community gardens, and enclosures for chickens and rabbits on rooftops and in small areas around their houses.
For more information on the dinner/presentation event and the Advance Projects contact: ip.taskforce@cnumc.org