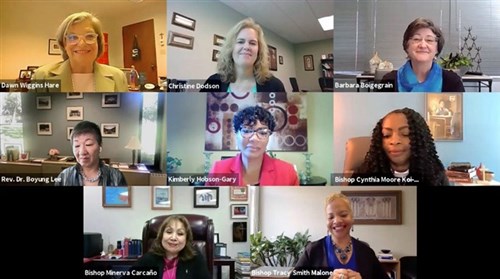 Mozambique Area Bishop Joaquina Nhanala, the first and only female United Methodist bishop in Africa, has learned to weigh when and how to respond to falsehoods prompted by blatant acts of sexism.

“At the beginning, I would try to clear my name by responding to it,” she explained during a virtual gathering to promote and celebrate women’s leadership in the church.

But that took energy and time. Eventually, Nhanala realized that “deeds speak louder than words.”

The bishop’s deeds so far have included appointing eight women among her area’s 20 superintendents.

The pandemic scuttled plans by the United Methodist Commission on the Status and Role of Women to gather 200 to 250 women in the Chicago area this fall. But the Oct. 8-10 virtual women’s leadership summit attracted that many, with others registering to view a limited-time archive afterward.

“Maybe God envisioned something bigger,” said Dawn Wiggins Hare, the commission’s top executive, as participants checked in from locations across the U.S. and in Europe and Africa.