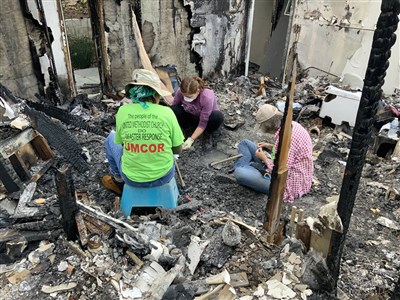 United Methodist News reporter Jim Patterson is following the story as California prepares for another wildfire season. He talked with Great Northern District Superintendent Blake Busick and Rev. Lindsey Bell-Kerr of the California-Nevada Conference for his report.
By Jim Patterson
June 5, 2019 | UM News
Calm prevails as fire season approaches California, probably because it’s been unseasonably rainy this year, said a United Methodist clergyman who lost his house to fire in 2017.
“I don’t notice people being on edge so much,” said the Rev. Blake Busick, superintendent for the Great Northern District of the California-Nevada Conference. “We’re getting a lot of rain in May, which is unusual for us.”
Wildfire season, which in the past was mostly August and September, has crept into October in recent years.
“It will be dry up here in August and September,” said the Rev. Lindsey Bell-Kerr, pastor of First United Methodist Church and Christ Church United Methodist in Santa Rosa, California.
Read more