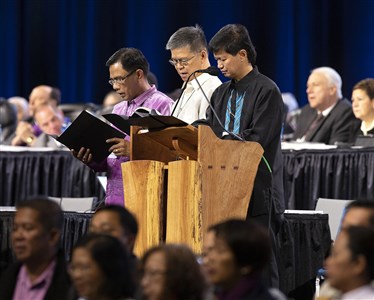 After heated debate, the Philippines Central Conference’s coordinating council voted to extend the episcopal leadership of the country’s three incumbent bishops through the end of 2021.

The debate at the council’s special virtual meeting Nov. 26-27 emanated from a question and call from three United Methodists to the Committee on Episcopacy to uphold rules on the term limits of its episcopal leaders.

In the Philippines, bishops are elected every four years. They can be re-elected as long as they have not reached the age of 66. Bishop Ciriaco Q. Francisco, who oversees the Manila area, was set to retire in 2020 under the mandatory age limit, while Bishop Rodolfo A. Juan of the Davao area had announced his plans to retire voluntarily after serving three terms. Pedro M. Torio Jr. of the Baguio area had not yet announced his plans after serving two terms.

In early November, the Council of Bishops recommended that the five U.S. jurisdictional conferences — now scheduled for next year — postpone any elections of new bishops until 2024. The council also urged a slowdown in plans to add five more bishops in Africa, but made no recommendations regarding episcopal leadership in the Philippines.

In a letter, the trio challenging the extension stated that the Council of Bishops cannot override the rules of the Philippines Central Conference. “It is a matter of respect in responding to its contextual situation,” the letter said.

“The spirit of the PCC rules regarding term limits emanates from democratic norms of leadership accountability and mandate. Every quadrennium, PCC bishops seek a fresh mandate to continue holding office until such time that they are able to retire or reach the age of mandatory retirement. The bishops deserve that mandate and our constituencies deserve to have their voices heard in an episcopal election.”

The Rev. Egmedio B. Equila Jr., clergy delegate from South Nueva Ecija Philippines, was one of the three who signed the letter.

He said the coordinating council has no right to extend the term of any bishop.

“The law provides an answer in case of any emergency like this pandemic crisis,” he said, citing the provision from the Philippines Central Conference Discipline Paragraph 49. “There is a legal remedy in any emergencies that result in a vacancy in the office of bishop, that is, for the Council of Bishops to assign a bishop to fill such vacancy.”

He said violating the church’s law is not good for its future.

“(The) U.S. has its own jurisdictional laws; we have Philippines Central Conference laws that we should abide by and respect,” he said.