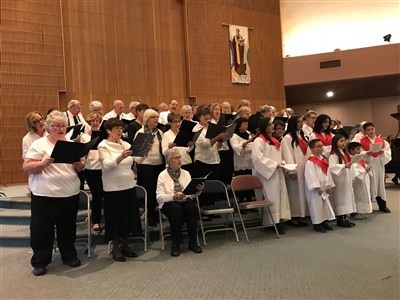 Three churches in Concord, California combined efforts for a Jan. 19 event to benefit two churches in Paradise, California – the community virtually destroyed by a wildfire on Nov. 8, 2018. 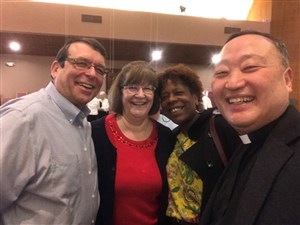 
“We pastors meet regularly and work twice a year (Good Friday and Advent) for joint worship,” Lee says. “We have built this relationship for many years and done other things together, like Peace Walk last year. Based on this ongoing fellowship of pastors, we accepted the initial idea from the choir director of St. Bonny to have a joint benefit concert.” 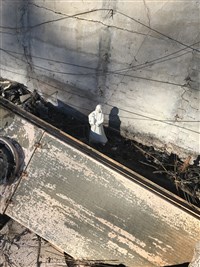 Lee suggested that pastors from Paradise be invited to share their stories, and two accepted the invitation. One was the Rev. Bob Chicou, pastor of Paradise UMC, who told his story of evacuating and of later finding his home destroyed. He gave a moving account of how his late daughter’s night light [at right], depicting Jesus holding a lamb, was found virtually untouched in the rubble of his home:

“As we drove up to see the remains of our home, we had been prepared for what we would see, by the photo posted by Cal Fire. Our home was just a pile of ash. Yet, as we pulled up to the site, our hearts sank. Everything was gone. The fire had been so hot that the two stories had dropped down to one thin layer of ash. As we stood talking at the sight, two men from Samaritan’s Purse came along. As we talked, one of them stopped the conversation, asking us to look at the corner of the foundation of our home behind us. There stood a little statue of Jesus cradling a lamb: The night light that had been our daughter, Shelby’s, before she died 14 years previously. Since that time our son Rob had always placed it in his room. The only thing saved, and sitting almost untouched, overlooking the ash, was this reminder of the love that Christ has for us…and the love of our sweet daughter. A clear message that when nothing else remains, we are in the safe arms of Jesus Christ and love survives.”

Chicou also gave an update on the condition of the church. Paradise UMC has gas and electricity now, and water was turned on just this week – but though it is usable, it is not drinkable.

He shared a photograph of the sanctuary [at right], taken by Conference Disaster Response Director Sonja Edd-Bennett when the pastor and his wife were first allowed to inspect the church under National Guard escort. It shows light radiating through the rose window, filling the sanctuary.

“Without electricity, this photograph shows a brilliant light that filled the sanctuary with peace and beauty. The brilliant, beautiful, peaceful, light is a reminder that Christ will continue to lead us and be present as we move into the future. As God’s light continues to light up the Paradise United Methodist Church, God will be glorified. God, in His glory and fullness, is still present here,” Chicou related.

The choirs performed at the concert under the direction of David Huff, Terry Jensen, Maryann Tarantino, and Barbara Wolpman.

“I am praising God’s Divine direction in the Concord area,” said Micheal Pope, Lay Leader for the California-Nevada Annual Conference of The United Methodist Church, who attended the concert as a member of Concord UMC. “God is so good. Christians together will change the world!”