A March For Black Lives in Richmond, CA 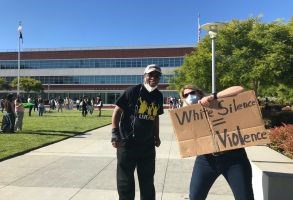 In less than a week the Youth Solidarity Project organized “March for Black Lives”. The organizers asked to use Easter Hill UMC because they learned that Dr. Martin Luther King Jr. visited the church in the 1960’s during the leadership of the late Rev. Dr. Booker T. Anderson, the pastor at that time.

Even with less than a week's advance notice, a large and diverse crowd gathered at Easter Hill UMC for the march.  Young folks, older folks, and middle aged folks across cultures and ethnicities, socio-economic, gender and faith traditions were on hand to stand and support the rights of Black people.

A number of presenters spoke to the diverse gathering including Rev. Dr. Dale M. Weatherspoon, pastor of Easter Hill. The speakers expressed their pain and sadness at the continued loss of black lives. One speaker called out the names of about a dozen people killed by police over the last several years. Another speaker said he had spoken at such rallies in 2016, 2017, 2018, 2019. He said he wasn’t coming back in 2021.

Each of the speakers in their way encouraged and applauded the young people who organized the event and who are working for justice. They encouraged the gathering to keep up the momentum of these protest by working with our law makers, community leaders and seeking police reform. All spoke to the importance of voting and sticking together and not letting others divide us.

After the speakers, the assembly marched two miles to the Richmond City Hall. There the peaceful crowd sat on the lawn and in the shade listening to young people sharing their heart and feelings through their poetry. Hearts were moved. Tears were shed.

We have an incredible and talented group of young activists living in our community.

The event ended with the gathering standing and singing “This Little Light of Mine”. Most of the marchers walked back to Easter Hill UMC feeling encouraged, empowered, heard and filled with hope.