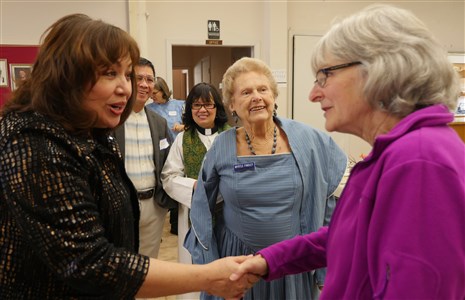 Sunday, October 7, 2018 was radiant with golden sunshine in California’s gold country, while an occasional soft breeze stirred branches not yet ready to flaunt fall colors.

At Colfax United Methodist Church, it was a day of celebration. Not a golden anniversary, not even a platinum jubilee, but a sesquicentennial, marking 150 years of ministry.

I was told that it is, in a sense, the oldest church in town. Although another denomination planted roots in Colfax sooner, that congregation is not in its original structure, whereas the white clapboard building with the steeply pitched roof – hammered together with square nails, using volunteer labor for the most part, as far as anyone can tell – has been at the corner of Church and Culver Streets since 1874, six years after its founding. The church was established just three years after the town of Colfax itself.

Not that it hasn’t undergone changes. In the early part of the 20th Century, a building providing classrooms, offices, and fellowship hall was moved across town and attached to the original structure. A steeple was removed in the 1930s. Later, there was a reorientation of the sanctuary. As it had been set up, it was necessary to walk past the choir and pastor to access the addition (where the restrooms are) during services. The awkward layout wasn’t addressed sooner, according to 99-year-old Myrtle Findley, because one pillar of the church wanted his casket to be carried out through a door that led onto Church Street. After he was successfully (and, we can hope, happily) laid to rest, the preaching area of the sanctuary was relocated to the opposite end and pews were moved around to face it. That was in March of 1992, Findley says. Now congregants enter the church through the kitchen, where they can get a cup of coffee before heading in to worship.

Understandably excited about the upcoming anniversary, celebration organizers at the church put the date on the bishop’s calendar two years ago. That was even before Bishop Minerva G. Carcaño was assigned as Episcopal leader for the San Francisco Area of The United Methodist Church, responsible for oversight of the California-Nevada Annual Conference. It’s her recollection that she spotted the calendar item on her first day at her West Sacramento, California office, and thought, chuckling to herself, “Wow, these people are planners!” To honor that spirit, as well as the spirit that has kept the church alive for so many years, Bishop Carcaño was in Colfax on Sunday to help mark the occasion and to preach a message titled, “What Love Can Do!”

“A congregation must be firmly rooted in order to survive so long,” she told worshippers, citing their “commitment to being the Church” in the community. The church’s longevity, she noted, speaks to its “deep-seated love of God and desire to share that love” with others.

Recalling the words of the Apostle Paul in Romans 8:31, “If God is for us, who can be against us?” the bishop said, “For 150 years, God has lovingly been here for you – and you, likewise, have been here for the community of Colfax.

“Keep working to be God’s people. You are a Christian community in the Methodist tradition …. A royal priesthood, true and faithful to God’s word and God’s call to you.”

The bishop said what is most important for any church “is to be bound by Christ day in and day out.” “The most important building,” she continued, “is God’s house: a home full of love, full of justice, and full of peace.”

She charged congregants with continuing to “share God’s loving mercy with everyone.”

“Even after 150 years,” the bishop concluded, “you are still called to be the bearers of [the] Good News. Thanks to Colfax UMC for its tremendous, loving, joyful witness!”

After the celebration of Communion (on Communion Sunday, no less – one of the Special Sundays of The United Methodist Church), and a benediction that had the entire congregation circling the sanctuary with joined hands, singing “Blest Be the Tie That Binds,” there were refreshments, followed by a return to the sanctuary for a video highlighting the church’s history and its ongoing ministry.

Pastor Elita (“Ellie”) Lubiano, appointed to Colfax UMC in July as a part-time local pastor (CLMs George and Ruth Beckman and Madella Shelton serve alongside her), told the assembly, “I hope that you will feel welcomed into God’s embrace through our celebration.”

The Rev. Blake Busick, district superintendent for the Great Northern District that includes Colfax, asked the gathering to picture the members of the church who have gone before them as a “crowd of witnesses” cheering them on. However, he challenged, “our posture is not [to be] looking to them. Our posture [should be] looking forward, looking to Jesus.”

Several people spoke to what Colfax UMC has meant to them – including a couple who met at the church’s addiction recovery group, then were married two years ago.

Madella Shelton, who officiated at their ceremony, had her own witness.

“This church is a place of healing, joy, and growth,” she said, explaining, “They sent me here to die.”

Shelton had been given a diagnosis of osteoporosis with heavy metal, that caused bones to break at the slightest touch or movement, and hair to break off practically at the root. Today she has regained vigor and sports a full head of tousled steel-grey curls.

“This church has prayed me back to life,” she told the group. “There are miracles in this church.”

Colfax UMC had a variety of names during its long existence, according to an article in the Colfax Record, published in 1993 to mark the church’s 125th anniversary. It’s interesting to note that for a two-year period in the 1920s, it was officially Everybody’s Church.