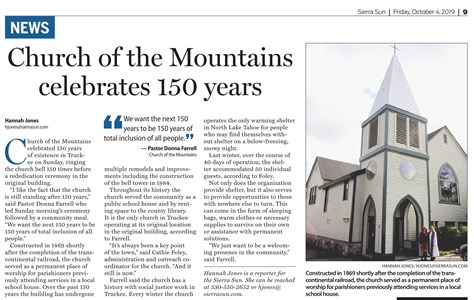 The Church of the Mountains United Methodist Church in Truckee, California celebrated its sesquicentennial (150 years) on September 29, an event that garnered press attention. The Sierra Sun newspaper reported on the milestone (October 4 edition, page 9), quoting Rev. Donna Farrell, pastor, as saying “We want the next 150 years to be 150 years of total inclusion of all people.”
Church of the Mountains is in the final stages of becoming part of the Reconciling Ministry Network and, Farrell says, “hopes to be a vital, progressive church prepared to meet the spiritual needs of our neighbors in the Truckee/Tahoe area, as well as the many visitors who come to our beautiful area.”

She adds, “We understand that the church does not exist for the sake of the people inside the church and we will continue to seek out opportunities to serve the community at large. Truckee is a growing resort area and we hope that we can be a part of the larger vision for Truckee's future.” Historically a small, rural church with a small membership, Church of the Mountains is known for having had a pastor called a "Chinese Sympathizer" who apparently was run out of town. This occurred during the late 1800s when most residents were utilizing the "Truckee Method" to remove the Chinese railroad workers after completion of the railroad.

“We plan to continue [the] practice of the Wesleyan Social Gospel,” Farrell says, “despite living in a society that sees marginalized people as disposable and less-than.”

Church of the Mountains is part of a larger consortium group, consisting of faith communities, social services, and community members, that works to ensure that its poorest and under-housed people are cared for. The church sponsors the North Tahoe Emergency Warming Center, which has begun its fifth season; during the 2018-19 winter it provided a total of 273 nights of shelter, housing 56 individual guests and 6 pups over 37 nights.

“Being the site for the warming canter has offered many volunteers, from the church and the community, an opportunity to serve in a capacity that suits them,” Farrell reports. “On the coldest and snowiest nights, when the triggers of 15 degrees and/or a foot of snow are met, anyone is invited in for a hot meal, a movie, a warm place to sleep, breakfast, and connection to much-needed services. Many times, this means providing a bus ticket to a more hospitable climate. In times when I-80 has closed, with no room at the inns, [the church] has been a place of refuge for families and tourists, as well.”

Church of the Mountains also partners with other faith communities to run the Food and Resource Support Center. The FRSC serves a hot lunch every Thursday and is open for three hours on both Tuesday and Thursday, during which counseling and clothing, showers and laundry, and phone and Internet are offered to those in need.

In celebration of the sesquicentennial, the church rededicated the pulpit and font, celebrated Communion (above), played, Farrell says, a little "pastor vs. the admin. assistant 'Jeopardy' – it ended in a tie, interestingly enough!" and closed out the celebration with "a good 'ol BBQ potluck, Methodist style."