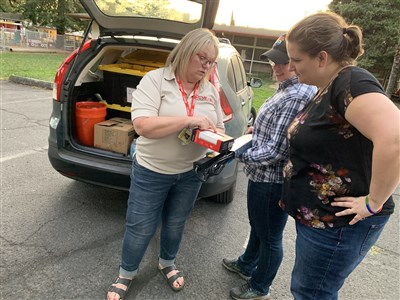 “This morning brought good news for those of us in Northern California, and many reasons for continued prayer!” says Sonja Edd-Bennett, disaster response coordinator for the California-Nevada Conference of The United Methodist Church.

“Overall, the Kincade Fire is up to 60% containment and many areas are repopulating,” she reports. Although the northeast section of the fire zone continues to threaten, “The feeling overall is one of cautious optimism.”

The fire forced evacuation of 185,688 persons in Sonoma County and has burned 76,825 acres to date, while red flag warnings due to high winds and low humidity prompted Pacific Gas and Electric Company (PG&E) to proactively shut down power to 962,912 customers in 36 counties. As of this morning, the utility reported power had been restored to customers in 25 counties and said it is continuing the “Initiating Re-energization Patrols” stage in portions of the following 13 counties: Calaveras, El Dorado, Kern, Marin, Mendocino, Napa, Nevada, Placer, Plumas, Shasta, Sierra, Sonoma, and Yuba. 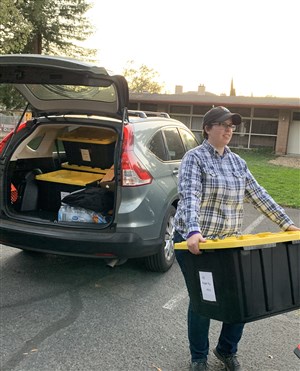 Although we escaped this fire incident with 141 homes destroyed – the fewest in years – no fatalities, and only four injuries, despite the magnitude of the Kincade Fire, it doesn’t mean the region was unscathed. Gratitude for the safety of people and property notwithstanding, the evacuations and power blackouts posed very real hardships.

It became apparent to Edd-Bennett and Los Rios District Superintendent Schuyler Rhodes early on that providing help in this situation required expanding the general type of disaster assistance and taking a creative approach to what the conference’s role could be. With evacuation shelters sprinkled throughout Northern California – from Lake County to San Francisco and even Sacramento – the conference office reached out to its greatest asset: The local church! Some were already open and serving, while others were eager to know how they might help, Edd-Bennett reports. 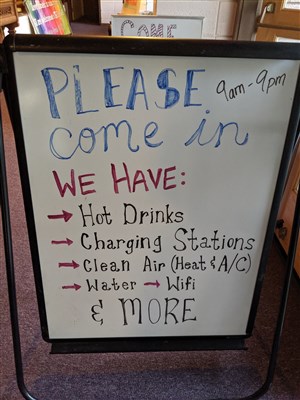 Already in place was a “hospitality center” at Community UMC in Clearlake Oaks, with the church making available its shower and power outlets, and providing a few meals throughout the week. Sonoma UMC was actively advertising on its Facebook page and through NextDoor.com that it was open with free WiFi and power, and was offering the church kitchen so that families could make use of their refrigerated and/or frozen food before it spoiled.
Taking note of the work already being done, Rhodes and Edd-Bennett developed a “hospitality center” template and reached out to other UMCs in the region to join in. The conference provided them with much-needed power strips, USB chargers, hygiene kits, and gift cards for fast food, groceries, and fuel. The concept was that the conference would come alongside and support the local churches with financial, material, and volunteer support.
Just as First UMC in Napa was in preparation to transform into a hospitality center, most of the evacuations were lifted and many homes in the area were to have their power restored within hours. The planning was not considered a waste of time, however. The church’s pastor, Rev. Marylee Sheffer, and her congregation were excited to receive the supplies from the conference and will continue planning for the unfortunate inevitability of "next time.”
If your church is interested in providing a Hospitality Center during future evacuations or power outages – or even during the next bout of extreme cold or extreme heat – contact Sonja Edd-Bennett at sonjaeb@calnevumc.org or 916-374-1525. She will be happy to provide helpful information or make arrangements for a “Connecting Neighbors” training provided by UMCOR.