Cal-Nev Clergy and Laity Train to ‘Do No Harm’ 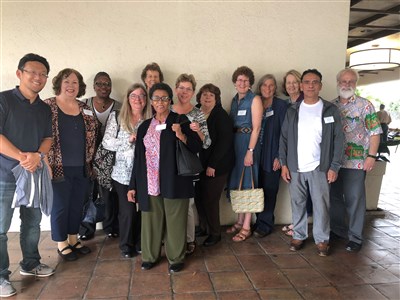 “Many of us brought pain, grief, and disappointment with us to San Antonio,” said the Rev. Kristie Olah, referring to the 2018 Do No Harm conference of the General Commission on the Status and Role of Women (COSROW), that came just a week after the Brett Kavanaugh confirmation hearings.

In the context of the hearings and “this important season of telling our stories as part of #Me Too,” Olah said, “It was good to hear stories from United Methodists across the connection. Gathered were lay and clergy, [and] bishops and conference leaders from coast to coast, the Philippines and several African conferences – all with different challenges and experiences. We learned from each other, but most important, we listened to each other. It helped give voice to our concerns and [helped us] find ways to make a difference in our own ministries, communities, and conferences in response to sexual misconduct of many kinds.”

Olah was part of a 13-member contingent from the California-Nevada Annual Conference – a mixture of clergy and laity – who made the trek to Texas for the October 11-13 event.

Rev. Gere Reist, Cal-Nevada’s Executive Director of Leadership Development, also attended as part of the leadership team, and agreed that the event was timely in light of national events. But that doesn’t mean, he noted, that cases of sexual misconduct are outside our sphere.

“We need to raise awareness across our annual conference and with our people about the potential for abuse – and the need to recognize the signs [of it],” he said.

To that end, a group of about 20 people (including those who attended the San Antonio event) has been formed to work on the issue. Tentatively called the Clergy Sexual Misconduct Response Team, the group may expand its scope at some point to try to provide healing when there are other instances of crisis in a local church. Initially, though, the focus is on ameliorating situations of sexual misconduct in an appropriate way, while recognizing the need for an educational component.

“I’m currently serving as a Youth and Family Minister,” said the Rev. Sungrae Kim, who also attended the conference in Texas. “One of the things I learned is that it is crucial to have well-established policies regarding sexual ethics – e.g., Safe Sanctuary policy – in each church, in order not only to prevent sexual misconduct of pastors or church leaders, but also to quickly and effectively respond to incidents if they happen.

“Now I’m thinking that it is the responsibility of those of us who attended the conference to share what we learned with our colleagues, educate the congregations, and train other church leaders to be better equipped with knowledge and resources for preventing and responding to sexual misconducts,” he added.

Do No Harm offered four tracks for learning:

“I was impressed by the entire conference: The task force, speakers, theatrical presentation, the panel [discussion on] response to sexual conduct, and the breakout sessions,” said Winnie Bender, one of the Cal-Nev laity who attended. “Thanks to Betty and Gere Reist for the endless hours spent in making this conference a success.”

“I was wrestling with the question of how we may find a balance between honoring all different cultures, and obligating everyone in the UMC to follow the denominational standards regarding sexual behaviors … How should we respond if the perpetrators argue that ‘it is nothing serious in my culture’ or ‘that’s just how things have been’? What do we do if we’re accused of being cultural imperialists who are trying to impose our ‘superior’ Western moral standards upon ‘inferior’ cultures that do not respect women?

“What I learned is that power abuse is always wrong. Therefore, we – as The United Methodist Church – need to build a culture in which no power abuse is acceptable, and clearly communicate with all pastors from different cultural backgrounds about our standards as affirmed in the Book of Discipline.

“If culture is defined as a way of living, when someone’s way of living is harming someone else’s lives, that is not a cultured living, anyway.”

“[I thought] the most interesting session was led by Dr. Jennifer Freyd, who has studied memory and trauma for the last 20 years at the University of Oregon and at Stanford. Her work framed the testimonies by Dr. Christine Blasey Ford and Justice Kavanaugh, and helped us understand the responses of others, emphasizing how – especially for women – emotional betrayal can lead to deep trauma and suppression of events.  It will help me to listen more openly as people seek to share their stories – in church settings and outside of them.”

Olah said that she, too has experienced sexual harassment in the workplace – though “primarily before becoming a clergywoman” – but reported that unfortunately, in her ministry, she has also been confronted with the challenges facing clergy, their families, congregations, and victims, and has “walked with some [of them] through situations of misconduct.” She said that at such times, people lose faith in the Church, their church leaders, and sometimes even in God.

The Clergy Sexual Misconduct Response Team aims to help – but for it to be most effective, Reist believes, its representation needs to be expanded.

“We need more laity,” he said, adding, “We are particularly looking for attorneys, counselors, nurses, and members of law enforcement, as well as cross-cultural laity.”

The 2018 Do No Harm conference was the second Olah had attended. She also went to the 2011 event and said, “both were excellent.” It is very important for The United Methodist Church to host such trainings, she said, “so we can respond in fair, healthy, relational ways to situations that may arise. We need to be transparent and help our congregations to expect the best in our leaders and each other.”