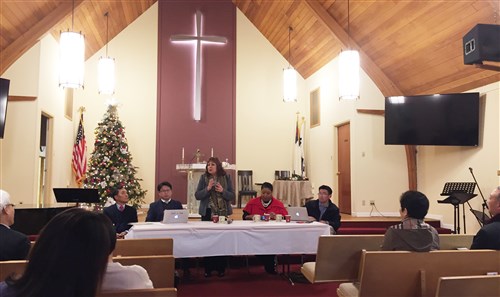 Members of the Korean Caucus of the California-Nevada Annual Conference met with Bishop Minerva G. Carcaño and other conference leaders in December for a two-hour dialogue about the direction of The United Methodist Church, and the plans for A Way Forward to be considered at a special called session of General Conference next month.

The gathering was one of many “intentional, faithful conversations” conference leadership has been having about the issue. It took place at Contra Costa UMC in Walnut Creek on December 19th and followed a similar time of conferencing involving members of the National Korean Caucus and five UMC bishops. At that meeting, held in East Brunswick, New Jersey, the national Korean leaders expressed concerns about how Korean churches nationwide might be affected if the One Church Plan is approved.

OCP is favored by the Council of Bishops, Western Jurisdiction Mission Cabinet, and Cal-Nevada Extended Cabinet.

“If the One Church Plan passes, KUMC would have difficulty in accepting an LGBT bishop assigned to the Korean UMCs, due to its cultural and moral traditions,” said the Rev. Paul Chang, executive director of the denomination’s Korean Ministry Plan.

In Cal-Nevada, however, despite the traditionalist base of the conference’s Korean churches, there is some support for the One Church Plan, according to the Rev. Young Rae Kim of Contra Costa UMC and the Rev. Hyuk In Kwon of Open Door UMC in Oakland, who took part in the December meeting. District superintendents Staci Current and Shinya Goto participated as well.