Bike Ride at Fresno Classic Century 2019: A Witness to Faith and Wellness 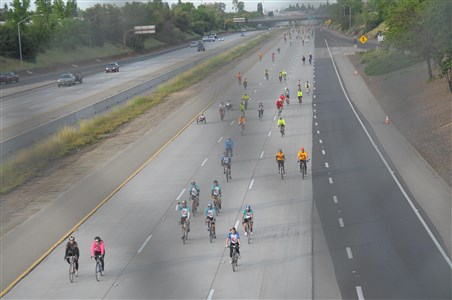 The stories of Jesus walking from one town or city to another and climbing up a mountain several times may give us inspiration to commit ourselves to a lifestyle of health and wellness. Of course, walking was the primary mode of transportation during Jesus' time, and therefore was a necessity. But if Jesus hadn't been put to death because of injustice and the imperial power that ruled his community, he possibly could have lived a very long life because of that walking! Whenever I climb up hills and mountains, such as Mt. Diablo (4,000 ft elevation) in Walnut Creek or Mt. Tamalpais (5,000 ft. elevation) in San Rafael, I tell myself, “I can do this, since Jesus walked up the mountains several times.”

Today, walking – and also riding bicycles – is a form of spiritual discipline. Each one of us can pray and reflect on the faithfulness and works of God in our lives while we walk or ride our bicycles. Walking or riding a bicycle helps protect the world we live in by not producing pollutants, too.

It can also foster significant interaction. One of my most meaningful conversations on human sexuality and support of the LGBTQIA brothers and sisters in our church community happened in April 2011 while a friend and I were pedaling about 19 miles per hour in San Diego, towards the border of Arizona for a one-way 100-mile ride. My friend Ross Schaefer was born and grew up in the Lutheran Church in Chicago and moved to Northern California. He was very delighted to hear from me about my support and living out diversity and inclusion of all people. The bike ride provided that opportunity to witness for faith, embracing the love of God in Jesus. 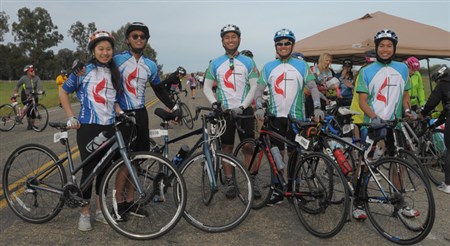 Fast forward to April 5-7, 2019, when I led a group of seven for the first Young People’s Ministry bike camp and major bike ride. I felt that it was a very good start in campaigning for a lifestyle of walking or riding bicycles. There were five young people and two of us adults, who joined about 2,000 riders on April 6th. Our group completed the Metric Ride of 100 Kilometers that is equivalent to 62 miles in five hours (including three rest stops). It's a remarkable achievement that the two youths (ages 15 and 16) and three young adults (ages 22-25) were able to finish the ride on a very pleasant day.

It was the first major ride on which we wore our California-Nevada Annual Conference bike jerseys, which made for a very fulfilling day of witness, conversation, and getting connected with people. Several of the other riders and ride volunteers asked about the meaning of our emblem, printed on the front and back of the jerseys, and several of them got re-connected to The United Methodist Church, sharing their own stories of being born into Methodism and growing up Methodists in Bakersfield and in Denver, Colorado. One of the male riders talked with us about how he so appreciated seeing Methodists join a ride such as that one, and as he is very much involved in his church as well, encouraged me – when he learned that I am clergy – to keep sharing the good news of the love of Jesus to all people. 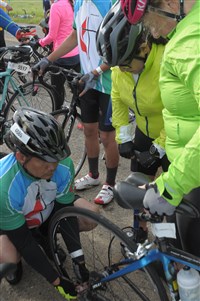 Thanks to Cory Parish, Director of the Endowment Board, who suggested having the emblem on the front and back of the jerseys for visibility and witness. It served its purpose of making our church known by its beautiful branding.

In fact, we were pedaling about 20 miles an hour on Freeway 168 in Fresno-Clovis and I was engaged in a conversation about our church, when two of the other riders came close to our group and spoke with us about the church and how nice our jerseys are. That was so cool! I told our group that we become a witness to other people, and we leave it up to the Holy Spirit for any decision or fruit it may bring up in the hearts and souls of those who have gotten acquainted with us through a ride.

We become models to our youth and young adults and witness to them when we do what we preach. We encourage them to think big and do big things, such as joining a major ride like this Classic Metric Century. And when we join them, we mentor and disciple them. We join them in mission outreach and mission trips. We exemplify how to witness for Christ and how to envision in growing a diverse and an inclusive church. Riding a bicycle for a long distance develops stamina, endurance, and patience. The verse in Philippians 3:14 is an inspiration in our work collectively as it says, "I press on for the prize of the heavenly call of God in Jesus Christ." (New Revised Standard Version of the Bible)

John Wesley once said, "The world is my parish." We have quoted that a number of times in affirmation of the scope and extended area of our outreach and ministry. I would like to adopt Wesley's words and adapt them to fit the context of the bike ministry, saying, "The ride is also my parish!"