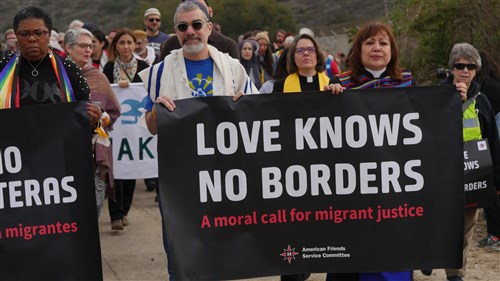 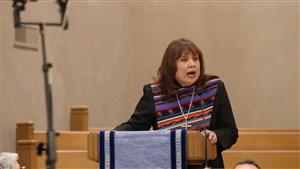 “We are going forth to live lives of love,” Bishop Minerva Carcaño said in her benediction Sunday evening (Dec. 9, 2018), as a packed congregation of Christians, Jews, Muslims, people of other faith traditions – and of no faith tradition – prepared for the next day’s Love Knows No Borders demonstration in San Diego.

The ecumenical service dedicated to migrant justice was held at University Christian Church (Disciples of Christ) in Hillcrest.

“Our immigration and border control policies put endless families in inhumane predicaments,” Rev. John Fanestil, a United Methodist, had told the gathering earlier. “When you walk [tomorrow] you will be walking on sacred ground. It is an important journey to be walking with people whose lives are dedicated to love.” 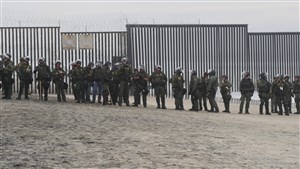 The border security force of more than 1500 was contrasted to the 7800 migrant deaths that have occurred since Operation Gatekeeper was launched in 1994 by then-President Bill Clinton, in an effort to end undocumented migration at the US-Mexico border in San Diego. One such fatality was the husband of Maria Puga, who told the story of her husband’s killing at the hands of border control agents. “There is no control over immigration agents. They act with impunity,” she said through a translator.

United Church of Christ (UCC) Rev. Traci Blackmon defined “peace” as the presence of justice and love, rather than the absence of war, adding that with that interpretation, “there is no such thing as ‘peaceful’ protest. [However,] You can have ‘non-violent’ protest.”

“Loving people is an act of resistance,” she reflected – against racism, xenophobia, homophobia, sexism, and other societal evils. “We must welcome, always, those in the midst of exodus,” she added. 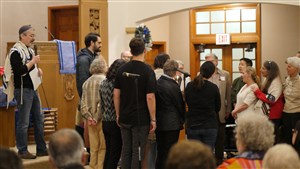 Rev. Dr. Liz Theoharis, co-chair of the Poor People’s Campaign, issued the evening’s call to action, saying, “We are preparing for a season of justice – a Kairos moment. Justice is around the corner, and we must be ready.”

It was, significantly, the eighth night of Hanukkah, The Festival of Lights in which the final evening is “the night that that the Jewish community lets its light shine the brightest,” according to Rabbi Brant Rosen, who called others of his faith forward to light a menorah. Shakeel Syed, Executive Director of the Islamic Shura Council of Southern California, prayed to the God of Abraham, Isaac, and Ishmael, saying, “Your love knows no borders.” 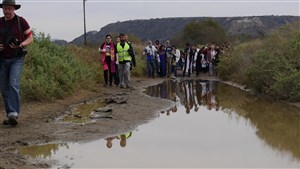 The following day, hundreds of people gathered for the nearly two-mile walk from the entrance to Borderfield State Park to the fence, topped and outlined with concertina wire, that divides San Diego from Tijuana, Mexico.

Bishop Carcaño helped carry a “Love Knows No Borders – a moral call for migrant justice” banner for the duration of the trek, made over a rutted dirt road and through deep sand. At least four California-Nevada Conference clergy – Director of Connectional Ministries Jorge Domingues, Roseville UMC pastor Rolland (“Rolly”) Loomis, and district superintendents Schuyler Rhodes and Shinya Goto, also walked, and were among the group of around 50 protestors wearing white armbands that signified their willingness to face arrest. 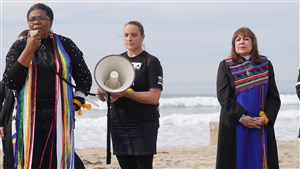 The group paused when it arrived at Imperial Beach, roughly the halfway mark, to remember those who died in the desert while seeking freedom, as their names were read aloud. Bishop Carcaño and other clerics anointed the foreheads of those who planned to violate the no-trespass area at the border.

The act of civil disobedience, held on International Human Rights Day, was in protest of the militarization of the border, separation of immigrant families, and delay in processing the Central America migrant caravan asylum-seekers who are being detained in an outdoor shelter in Tijuana.

“Showing up to welcome and bless children, mothers, and fathers seeking asylum from very difficult and dehumanizing circumstances is the right and humane thing to do,” Bishop Carcaño said. “How we act in these moments determines who we will become as a nation.” 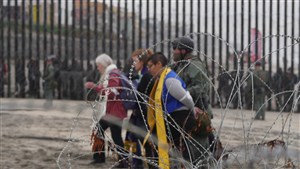 Armed guards in riot gear observed from hilltops as the group plowed through the sand. A drone scanned the crowd at one point – though whether official or someone’s toy, I can’t say.

At the border, the protestors – walking four abreast – approached the no-trespass area and were met with a line of border patrol agents who shouted instructions: “GET BACK!” Three protestors were arrested right away – then something of a stand-off ensued, in which the agents formed a human wall that prevented forward movement.

After a warning to move has been given, touching an agent in any way constitutes assault, a far more serious offense than mere trespassing.

The impasse lasted for what seemed like an hour.

Finally, Shinya Goto says, the border patrol agents “started to push – with the batons, and then the guns, whatever [they had].” The protestors knelt in the sand, signifying that no act of aggression would come from them. 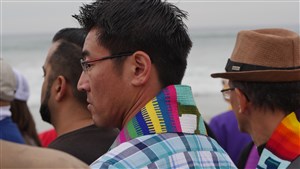 “And what happened was, maybe they got tired, they felt like they needed to do something … the people in the front stood up, and at that point [the guards] started pushing again. And I was probably in the fourth row back, maybe fifth, but they kept arresting people, and I kept moving up, and there was a point where I could see there was no one that was in that spot; there was a void. And I moved up, and they started pushing. The superior officer said, ‘move up,’ or, ‘move forward,’ and so all of them started to move up. And I did not back down. And at that point – I wasn’t gonna push, but I was also not gonna let them, I wasn’t gonna step back, and so they pulled me in, and they put me on the ground.”

Goto says he was grabbed, and one officer shouted at others, “Was he aggressive? Was he violent? Did he assault an officer?”

“And as I was on the ground,” he says, “a Latina lady who was part of the Border Patrol – but she didn’t have the same uniform as everybody else – said, ‘No, he did not. He just did not move. He did nothing wrong.’ And so this Latina lady, she spoke with an accent; I’m sure she was confused about the whole thing, she was trying to figure out her role of working for the Border Patrol, and then knowing where she came from, right? She was the one who was defending me. And that’s the only reason that I was not detained, or put in jail.”

Goto was handcuffed and lined up against a fence, where he was not allowed to sit down. After several minutes all the detainees were driven away, and next steps were explained: They would be fined and would need to appear in court in four-to-six weeks. 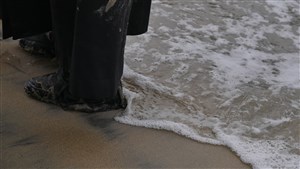 As the arrests were happening, the bishop and some others “made a conscious decision” to move to the ocean, to the right of the barricade of agents, and enter the water within the restricted zone, arm in arm. Their intent was to kneel and pray for immigrants and, in Bishop Carcaño’s case, at least, for the removal of the border wall.

“When it was first being built,” she says, “the ocean rebelled: the waters would not allow the pillars to stand.” Praying in those waters for the wall to come down seemed a powerful symbolic gesture, and one they expected to result in their arrest.

Agents swarmed toward them suddenly. “We thought they were going to pull us out of the water,” the bishop says, but instead, “they moved around us to detain Matt” (one of the chief organizers of the rally). He was the only one of nearly three dozen people arrested that day to face a more serious charge, that of assaulting an officer.

“Nobody knows how that could be; I think they just needed a victim,” says Rolly Loomis – believed to be the last protestor arrested. 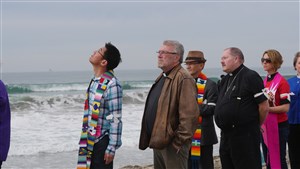 “For awhile we were just patiently waiting,” he recounts, “and then every once in a while, in unison, the Border Patrol would say, ‘MOVE BACK! MOVE BACK!’ and that was kind of frightening, and … when Bishop Carcaño went down to the water with some others I moved away, too, so I could see what was going on down there, and then she kind of fell into the water, and others fell, and I went over and I asked her if she was okay, and she said ‘yes,’ and so I stood up. And it was kind of a surreal moment for me, right there – and I walked over to the line, the line in the sand, and the border patrol agent, I walked right up to him and I looked him in the eyes, and I said, ‘God is calling me to do this; I’m sorry if I’m causing trouble in your day, but God is calling me to do this.’ And he said, ‘You need to move back,’ and I said, ‘No.’

“And he took me by the arm and he gently led me away, and actually kind of took care of me, helping me up the hill and passing me off to other guards, as I walked up the hill.

Goto confirms that he was handled roughly, but adds, “My experience? What I can tell you is that it’s absolutely nothing compared to what the migrants have experienced. Yes, it was rough, but you know, these people that experienced gang violence to come to the point where they feel like they have to migrate – you know, they’ve been abused, and then they come here, they come to the border, and they’ve been abused again. And so it’s absolutely nothing. And I do feel that those who have a voice need to use it.” 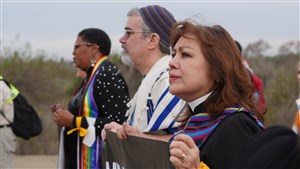 “I heard the number of Methodist presence from anywhere from 50 to 60, and that’s people from all over the country, all over the denomination,” he says, adding, “I think we can do better. I think we need to do better; I think the Methodists need to take action. So one of the things that we talked about is sharing the news of what happened, sharing the story – and so we each vowed to keep talking about this issue: at the annual conference, or to their friends in their church – I think we need to continue to tell that story, and invite others to join in.”