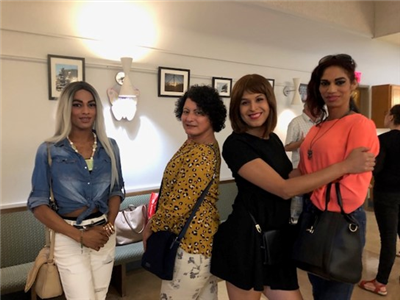 “We don’t have to deal with ICE,” they say, but there's a long list of other roadblocks that confront Trans Asylum Seekers and their sponsors. During a recent panel discussion at First United Methodist Church in Sacramento, sponsors fielded questions about what it takes to assist asylum seekers once they are in the United States.

"Sometimes they just need a ride to the doctor, to the store, to a court appointment," said one sponsor, who encouraged attendees to commit to accompaniment if they're unable to host someone in their home. Another sponsor noted that the seekers only have the clothes on their backs, and need simple things – such as a toothbrush.

"They need so much," explained another sponsor, warning that it is overwhelming to care for asylum seekers alone and that being a part of a church family and/or an association such as NorCal Resist can make the effort less burdensome. The panelists agreed that even the smallest assistance, including financial, is needed and appreciated.

The June 26th event was co- sponsored by the Reconciling and Social Justice Committee of FUMC Sacramento and NorCal Resist, to increase awareness and support for Trans Asylum Seekers.

More than 30 people attended, with several signing up to assist for the first time.

Workshop attendees listened as a panel of three women asylum seekers from Honduras, speaking through a translator, recounted terrifying events, acts of violence, and the constant fear they experienced leading up to requesting asylum in the United States.

Each woman also passionately expressed gratitude for the assistance received.

A second panel discussion focused on those currently hosting local asylum seekers, who talked about their experiences in providing accompaniment and shelter.

During question and answer time, Autumn Gonzalez of NorCal Resist explained how to sponsor or provide accompaniment, and made sign-up forms and an array of informational literature available.

To learn more about supporting the needs of trans asylum seekers, visit www.norcalresist.org or https://www.facebook.com/NorCalResist/.