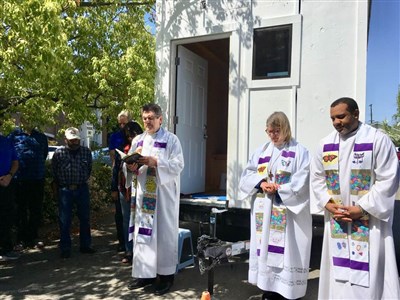 “God wants our brothers and sisters on the streets housed, He (God) got this done,” says Jeff Adams, a layperson at St. Mark’s UMC Sacramento, about the church’s completion of the construction of a “tiny house.”  Adams says, “I am in no way a construction guy. Going in, I had no idea how we were going to raise the funds and pull off the technical build of a house…Somehow, someway when we needed funds, or expert volunteers, they just showed up.”

St. Mark’s partnered with the E49 Corp for Compassion Village, a partnership of churches, nonprofits, and businesses to place homeless men and women in a tiny home village. Each resident is paired with a church community to produce health, hope, and healing, and a business community to mentor through employment, and nonprofits for various services.

Adams says, “A church, or other nonprofit group undertakes to raise $7,500 for a basic build kit, orders it from Compassion Village, builds it, delivers it, and then supports the resident for three years.”  The church is raising $5,000 per year for three years to support the resident who will occupy the home they built. “The idea is that they might live at the site from one to three years as they put together a plan to find permanent housing and a better way of life than living on the street,” says Adams.

The Rev. Alan H. Jones, St. Mark’s pastor, says, “Jeff is a businessman who decided to pull together some of his business community colleagues to help fund the tiny home project and build it on the St. Mark’s parking lot with people from the community and people from St. Mark’s working on the construction.”  Adams is relatively new to St. Mark’s becoming a member of the church and being baptized a year ago. “It was really a wonderful opportunity for St. Mark’s and community people to interact, and to celebrate when it all came together.”

Adams says, “The original thought was it would take three months to build.” Construction of the structure took six months. There were approximately 15 volunteers who constructed the tiny house with half of the volunteers being church members, and half coming from the community with a connection to the church.  After the tiny house is built, it is relocated to a tiny house village.

A tiny house village is a gated community with multiple tiny houses located on a common property. Residents live together with a set of mutually acceptable rules, and look-out for each other in a common space, while retaining individual living units. Houses range from very small (60 square feet), to relatively small (600 square feet). Some houses include plumbing and electrical, but many do not. Generally, a communal bathroom, laundry, and kitchen facility is built on-site, or residents have access to a church facility. Some tiny homes are built on trailers, while others are built on skids or a standard foundation.

St. Mark’s house has been relocated to St. Paul Church of God in Christ in Sacramento.  Adams says, “There are no plans to build another house at this point, but St. Mark’s will be supporting our resident and the program by volunteering at the site.”

The E49 Corp’s mission is to unite, develop and mobilize civic, business, non-profit and church leaders into collaborative solutions to social issues. So far, the group has built seven or eight homes with about 14 currently in process.


*Hygh is director of communications for the California-Nevada Conference which includes 370 United Methodist Churches with 73,000 congregants in Northern California and Northern Nevada.