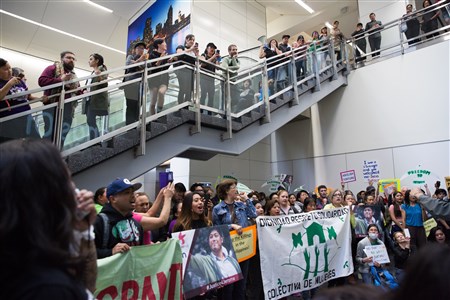 The immigrant who resides with you shall be to you as the citizen among you; you shall love the immigrant as yourself, for you were immigrants in the land of Egypt: I am the LORD your God. – Leviticus 19: 34

“Our faith calls us to action,” Nikki Salde declared into a microphone in a crowded SFO terminal. Salde, a member of Buena Vista United Methodist Church, was one of many Filipino activists and allies who showed up to protest the real-time detention and deportation of Filipino human rights activist, Jerome Aba on April 18.

Aba was en route to Ecumenical Advocacy Days in Washington, DC, where he had been officially invited to speak by both the General Board of Global Ministries (GBGM) and the United States Conference of Catholic Bishops.

“Jerome was invited by GBGM General Secretary David Wildman to lead a workshop with other human rights defenders, and talk about the conditions in the Philippines,” said United Methodist Pastor Michael Yoshii. “Extra-judicial killings of activists in the Philippines have spiked since 9/11 (with the US’s War on Terror). Activists are targeted and labeled as terrorists. That’s what happened to Jerome when he came here.”

Aba, who had a valid 10-year multiple entry visa, was detained without explanation, and starting at 8pm on April 17, was interrogated for more than 22-hours, during which time he was incommunicado. Aba alleges that along with being tortured, he was accused of being a “communist” and a “terrorist”, and denied access to an attorney.
“Jerome came to share the voices of the people, voices from the margins,” Salde said to the crowd. “He is a human rights advocate, and never thought he would be the victim of human rights violations. He never thought that his story would be the headline.”

But Aba has made the headlines, both in the US and in the Philippines, where he arrived after being deported. Customs and Border Protection maintains that he was allowed to voluntarily withdraw his application for admission into the US. Either way, the result is the same. Aba was unable to speak at Ecumenical Advocacy Days, though now, arguably, his voice has been amplified.

On April 23, protestors returned to SFO, continuing to demand justice for Jerome Aba. Along with people from the National Ecumenical and Interfaith Forum for Filipino Concerns (NEFFCON), activists from many other marginalized communities showed up to support.

“This issue of attempting to silence those who speak truth to power affects all of our communities, around the world, and here US,” said Kira Salde-Azzam, co-chair of the California-Nevada Conference’s Philippine Solidarity Task Force. “There’s a crackdown on activists, there are folks who are affected from the Latino communities to Muslim communities – all of us.”
NEFFCON is urging anyone who cares about human rights to contact their elected officials to express outrage about the horrific mistreatment of Jerome Aba. Californians are encouraged to urge Senator Kamala Harris, who serves on the Committee on Homeland Security, to investigate the case of Jerome Aba, to stop detainment and torture at SFO, and to hold Customs and Border Protection and the Department of Homeland Security accountable.