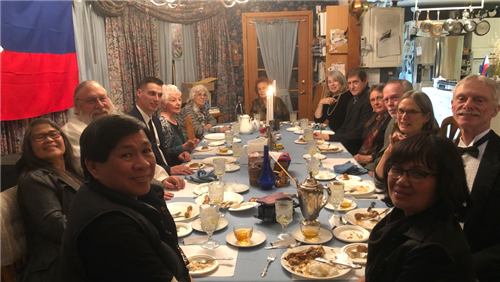 After celebrating her 100th birthday, Myrtle Findley, member of Colfax United Methodist church (CUMC), did not stop her volunteer activities at her local church and continues to host fundraising events in her home.

“She told me she forgot she was a hundred,” said Beth Murphy, chair of CUMC’s Nurture, Outreach, Worship and Witness (NOWW) board after a recent meeting where Findley volunteered to host another series of fundraising events in her home.

Findley is active on the NOWW board, United Methodist Women and Administrative Council as chair of the Memorials Committee. As a social outreach of NOWW and as a fundraiser for Memorials, a few years back Findley imagined up a unique event she entitles, “Ties & Jewels” where people can dress up and go out together.

“There is no place to go in a little town like Colfax where you can dress up,” she explained. “You have these nice clothes in the closet, and you have nowhere to go…and you never dress up for anything.” In January, Findley hosted a “Ties & Jewels” dress-up RSVP only dinner affair in her home featuring Filipino foods. She did not do all the work herself. She invited her pastor, Ellie Lubiano, and other members to prepare the dishes—only baking up the rice cake for dessert and preparing Ginger Tea herself.

With 17 people attending, and asking for a $25 donation, she raised more than four hundred dollars.

Findley says she gets food donated or pays for the food and gives all the money raised to the church earmarked for the Memorial committee and Endowment fund. In March she is planning to host a traditional Hmong meal presented by members of Trinity UMC in Sacramento who she recruited after meeting the pastor, Changjer Yang, at a conference event. She continues to keep her eyes open for more dinner ideas.

Murphy says Findley has hosted meals for as long as she can remember adding that Findley has been chair of the Memorials committee “for forever.” As chair, Findley assists her committee in researching the needs of the church, takes issues to the Trustees and raises needed funds. Last year, she invited church members, Richard and Stephanie Yue to prepare Chinese cuisine for more than 20 people asking fifty dollars per person to meet a goal of a thousand dollars.

“I got a lot of ideas from Myrtle,” said Lubiano who first met Findley when Lubiano’s husband, Rev. Ed Lubiano, was serving CUMC in 2007. “I was going to seminary then—she taught me how to arrange flowers for the altar. She was like a mentor, training people to do a little thing here and another thing there.” Murphy met Findley when Myrtle’s husband, Rev. Robert Findley, served CUMC back in 1976. “She got me to volunteer for writing the newsletter and said, ‘It’s just until you find someone else to do it.’ And, I am still doing it!”

According to Findley, she has no plans to stop her activities any time soon. “I am alive…and I have to DO something.”