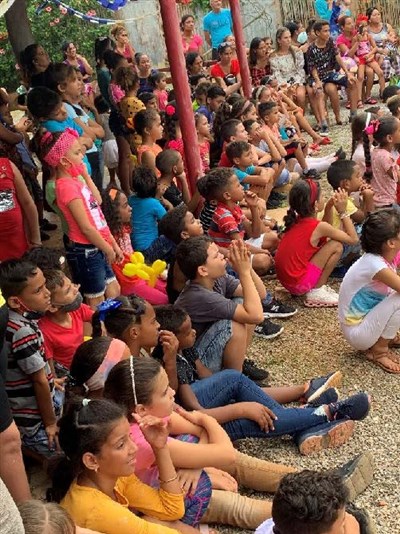 I visited Cuba in July of 2022 with the New Creation United Methodist Church of Campbell. The trip was led by Reverend Justin Ryu and Reverend Jung Ahn Yoon was our host leader in Cuba. Our group mostly comprised teens and college students. I wanted to share a little of what I learned and some of the experiences we had during our visit.

Cuba is the largest island in the Caribbean, with a population of over 11.1 million. In physical dimensions it’s slightly smaller than Pennsylvania and about 2/3 of it is farmland. The primary language is Spanish, but English is also taught in the schools, and so many Cubans are fluent. The climate is generally mild, with hot, humid summers. Cuba is frequently in the path of hurricanes and tropical storms. (In 2012 Hurricane Sandy swept through, killing 11 people.)

When Christopher Columbus discovered Cuba in 1492, he wrote, “This country is the most beautiful that human eyes have ever seen”. Cuba remained a colony of Spain for more than 300 years, and was severely exploited. African slaves came to Cuba in about 1517, replacing the indigenous people as they died from European diseases. Cuba finally became independent of Spain in 1898. Jose Marti, a poet, philosopher and national hero was instrumental in achieving independence from Spain. From 1953-1959, Cuba underwent another revolution, led by Fidel Castro. In 2008, Fidel Castro stepped down as president due to failing health. Fidel’s brother, Raul, succeeded him.

Today, Cuba remains a socialist government, dominated by the Communist Party of Cuba. The collapse of the Soviet Union caused hardships for Cubans who were severely dependent on Soviet aid. The average person receives about $50/month in salary and the government provides basic food rations, education, and medical care.

Cuba boasts one of the highest literacy rates in the world, and education is free up to the university level. One of Cuba’s biggest exports is medical workers. In fact, Cuba pays for oil imports with revenues from exported medical workers. In addition, Cuba is home to a thriving “medical tourism” industry.

The US does not have normal diplomatic relations with Cuba, and so sightseeing by US visitors is restricted.

Cuba also restricts religious activities. Nevertheless, religion is very important in Cuba and in recent years, the government has softened its stance on religion. There are many Roman Catholics and followers of Santeria (a religion that mixes Roman Catholic and African beliefs). After a visit by Pope John Paul II in 1998, Catholic followers have steadily increased. Only about 4% of the population is Protestant.

Our group conducted a Vacation Bible School, including puppet shows of David and Goliath and a short message about Jesus from Reverend Ryu. We did arts and crafts with the children, making beaded bracelets, paper dish crowns, pipe cleaner figures and crayon drawings. We visited eight churches and were received by the children with great enthusiasm! We shared goodies, including gummy bears and crayons with the children, as well as other supplies.

We sampled Cuban food, which blends the strong flavors of Latin and African cuisines. The Cuban diet depends heavily on beans and rice, seasoned with onions, garlic and peppers. However, the food we ate was very bland, so we spiked it with Sriracha and Chinese hot sauce. There was chicken and pork, root vegetables, fruit and eggs. Interestingly, fishing is prohibited (because the Cuban government doesn’t want citizens to have access to boats), so fish is not available. Thus, seafood is great treat!

The accommodations were challenging: cold showers, flushing the toilet with a bucket of water, and intermittent air conditioning. Drinking the local water was hazardous, so we wished we had brought more medication for diarrhea. Thankfully, we had medication for mosquito bites.

Sadly, conditions in Cuba remain discouraging. Young people see no future due to the lack of opportunity in the current pollical and economic system. State security maintains control by spying on everyone, especially, writers, teachers and community leaders. While Castro has achieved limited success in Education and Medicine, his critics point out that he has largely failed to create a just, fair, and prosperous society for the Cuban people.

Cubans who reach the shore of Florida are accepted as refuges, but although Cuba is only 90 miles away, there is no easy way to get from Cuba to Florida. Traveling through other neutral countries is costly, at about $40,000 per person.

The trip made us truly grateful for the freedoms we enjoy and the comforts we live with!