Brothers and Sisters in Christ,

It is with deep sadness that we inform you that our brother, Rev. Arturo Capuli died on Wednesday, November 8, 2017. 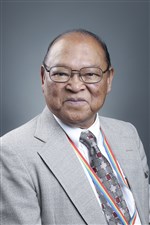 Art began his ministry in the Philippines, then the Illinois Great Rivers Conference, transferring into California Nevada Conference in 1980. He served the Oakland: Melrose United, San Francisco: Grace and San Francisco: St. Francis churches before retiring in 2003. Since 2011, in retirement he served as supply pastor at Sacramento: Florin United Methodist Church.

He is survived by his wife, Dolores “Dolly” Capuli of Fairfield, CA, his son Earl Capuli and daughter-in-law Lillian Capuli of San Francisco, CA, and by 3 grandchildren. Condolences may be sent to Dolly Capuli at 583 Mural Lane, Fairfield, CA  94534.

Let us continue to give God thanks for Art’s life and witness and hold his family close in prayer.  In our living and in our dying, we belong to God! (Romans 14:8)