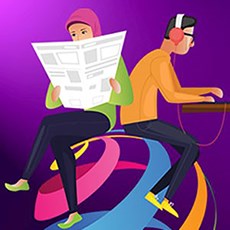 On September 29, 1995, volunteers for the Global Media Monitoring Project in 71 countries spent the day watching TV, reading the paper and listening to the radio. They were monitoring how women were represented in the world’s news.

What they found was eye-opening. Women were the subject of only 16% of news stories. In the U.S., only 26% of women were interviewed as experts.

Since then, every five years the Global Media Monitoring Project spends one day monitoring the news to track the representation of women. This year, for the first time, the project included examining the roles of Indigenous peoples, people with disabilities, racial groups and the elderly in the news.

United Methodist Women has taken an active part in the Global Media Monitoring Project since its beginning in 1995.

The idea of a one-day study of women in news media came up during a conference on Women Empowering Media in Bangkok in 1994, sponsored by the World Association for Christian Communication. Media Watch Canada, a volunteer organization working to eliminate sexism in media, offered to coordinate monitoring the news. The results of the study were presented at the Women’s Non-Governmental Organizations’ Forum in Beijing in September of that year.

25 years later, this year’s sixth GMMP report includes data from 116 country teams and examines 30,172 stories published in newspapers, broadcast on radio and television, and disseminated on news websites and via news tweets.

Preliminary statistics show that while progress is being made, the path to fair representation is a long one.

From 1995 to 2020, the largest strides toward parity have been made in radio, and television has replaced newspapers as the medium in which women appear most.

In the year 2015, when Twitter-monitoring was introduced for the first time, the presence of women on Twitter was significantly high at 40%; in 2020, it stands at 32%. Also on Twitter, news stories reported by women in 2020 is at 43%.