Who is my neighbor? Exploring the Japanese American culture 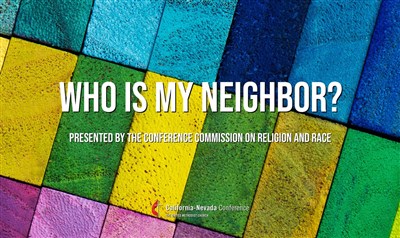 Who is my neighbor? is a series of videos and articles presented by our Conference Commission on Race and Religion that unpack elements of the many cultures across California-Nevada. Elements the series will cover include communitarian and individualistic cultures, examining different modes of conflict resolution, leadership style, decision making and worship styles including rituals around baptism and confirmation.  Understanding that no one person speaks for an entire ethnic group, panel discussion participants will be chosen by the community to ensure a balanced cultural representation.

Who is my neighbor? launched in May with an exploration of the Fijian culture. Since that time we have covered the Tongan  and Filipino cultures.

This latest installment features the Japanese American culture and includes a video taped panel discussion with reflection questions for individual or small group study and the following article which summaries the panel discussion.

Next to China and Korea, Japan is a narrow stratovolcanic archipelago stretching 1,900 miles between the Pacific Ocean and the Sea of Japan. Sitting on multiple tectonic plates, Japan undergoes a continuous subduction process causing frequent earthquakes as well as tsunami and stratovolcanoes. Typhoons occur seasonally. The 6,852 islands are mostly remote except for four major islands.  Japan is the fourth largest island country in the world with the 6th longest coastline.

“It’s the size about the same as California,” explains Yamada Foor. “but the population is half of the [entire] United States all squeezed into California… that’s why Tokyo is one of the biggest cities in the world.” Because the islands are mountainous, most of the 126 million people live in the narrow coastal plains. Japan is the eleventh most populous country in the world and one of the most densely populated. “By the way, if you lived in Japan, they have a world map with Japan in the middle,” states Yamada Foor laughing and explaining why she was confused when people tell her Japan is in the ‘Far East.’

“Being a Christian in Japan is a very unusual thing,” states Rev. Yamada Foor. “Most of the people in Japan are a mixture of Buddhism and Shintoism which for a thousand years mingled together and became a part of the culture—so it’s hard to identify which is which.”

Culture and faith continue to mingle within the Japanese American UMCs.

“Among Japanese American congregations …we are diverse theologically,” states Yoshii explaining influences of forged relationships with other faith families including Buddhists and Shinto through shared experiences including incarceration in the United States. “Japanese Americans have had a ‘subterranean’ area where their interfaith experience is different… we are connected into faith in a different way… we are very interfaith.”

“Through the incarceration experience, we are Japanese American community first before we are Christians or Buddhists,” adds Yamada Foor. Oftentimes, different faith leaders collaborate with one another in ceremonies, hospital visitations or funerals.

The panel discussed ways Sunday worship may differ including a time for intentional silence, opportunities to honor ancestors, and ways to express the beauty of nature.
Along with Christian holidays, the Japanese Community celebrates Memorial Day and New Year’s Day. Recent observances included a Hiroshima Day virtual rally “Making the Unthinkable Impossible” on August 6th and “From Hiroshima to a Healthy Tomorrow: Embracing Our Common Humanity” rally at the gates of Livermore Laboratory.
Amongst the Japanese American community, names are given to the different generations of immigrants to the United States. Historically, according to Yamada Foor, those born in Japan, particularly the older generation immigrating in the 1890s or so, are called Issei. Nisei or the second generation are those children of Issei born in the United States. Sansei is the next generation born in the United States followed by the fourth generation or Yonsei.

“The Nisei, generally, were children/young adults during the incarceration,” states Miyake-Stoner referring to the historical time period from February 1942 to March 1946 after the bombing of Pearl Harbor by Imperial Japan during World War II resulting in the internment of Japanese Americans in concentration camps. “They grew up in this kind of interesting place of liminality with immigrant parents—most of them. Their first language was Japanese speaking at home and then they would go to school… and you know there’s all these stories that we hear… like ‘my teacher couldn’t pronounce my Japanese name. So, she gave me a name like Dorothy’ … They’re Americans and yet they’re growing up in a very kind of traditional Japanese ideas from their family—then they’re incarcerated…”

Miyake-Stoner describes the following generation as a “sunset generation” with less ties to the Japanese culture. “I think that’s such an interesting complexity within the generations—like a pendulum swing, right?”

“I think, for Japanese Americans there’s this relationship to Japan that I see, as being very diverse among the Japanese American community in terms of the connection to Japan, and just a sense of whether Japan is home or whether the US is home,” states Rev. Yoshii. “I think it's because of the experiences the Japanese Americans have had in this country, and that, you know, obviously our heritage comes from Japan. There are folks who feel very much like Japan is home, but others feel that the US is home because this is where people have experienced life.”

“There are people who started to say, ‘No Sei,’” explains Yamada Foor, “meaning, as a generation, we are part of the culture.”

Although individuals in the Japanese American community experience different historical journeys, the panel discussed strong Japanese cultural values embedded within their communities today including gratitude, respect for elders, a sense of beauty, calling on the ancestors, valuing silence as well as the pressure to fit in, not embarrass others, and to never say ‘no.’

“The value of gratitude is really important—whether that be verbal expressions of gratitude or … gifts that you bring—you never arrive anywhere empty handed,” states Miyake-Stoner referring to the Japanese custom of gift giving called ‘Omiyage’. “Serving the Japanese American church, I don’t think there’s ever a week that goes by without receiving some sort of omiyage gift, whether it’s sweet peas from someone’s garden or a book—some lovely thing of gratitude and thankfulness… it means a lot.”
“In serving congregations, what I saw was less individualism and more collectivism…working in harmony,” states Yoshii. “You do it non-verbally…like people just know when it’s time to clean up and everyone takes their positions.”

“What I heard a lot growing up was …don’t bring attention to yourself,” states Kiyuna. “Don’t be loud, don’t be garish—be quiet and humble.”
“I was taught ‘gaman’ or perseverance… I think it is the core, the unwritten rule that you are supposed to do,” states Yamada Foor, “Hollywood movies have a happy ending, Japanese movies usually does not have a happy end because happiness doesn’t come that way… you are living for others, you are living for the community, it’s not about your happiness.”

Yamada Foor notes that perseverance coupled with the tradition of not asking for help can lead to negative consequences such as a lack of selfcare and vulnerability to abuse.

The panel discussed ways traditions are changing including women stepping up into leadership roles in the church.

“Akiko and I probably are the first female pastor of our existing churches,” states Yamada Foor discussing the social norms of women only taking on secondary leadership positions in Japan. “…but those things are shifting generation-wise. The older generation women are all in the kitchen but my generation, they don’t want to be in the kitchen. They want to be doing whatever they want to do.”