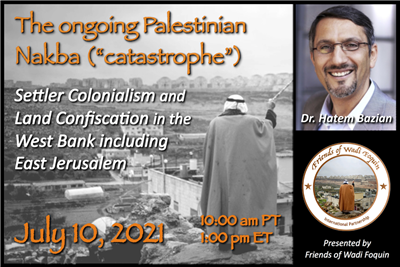 In June, Friends of Wadi Foquin presented a webinar on current land confiscation in the West Bank village of Wadi Foquin for construction of a new segregated road that will serve the illegal Israeli settlements and expand Israel’s apartheid infrastructure.

This month, we will look at the larger picture of Israel’s colonial settler enterprise and the systematic confiscation of Palestinian land throughout the West Bank including East Jerusalem. This colonial theft is a key element of the Nakba, the catastrophe: the continuing crime of ethnic cleansing that the Palestinian people have endured since the Zionist project began in Palestine over a century ago.

Our special guest speaker will be Dr. Hatem Bazian, the renowned educator, community organizer, social justice activist, and prolific author, including the book "Palestine...it is something colonial." Dr. Bazian is co-founder and professor of Islamic law and theology at Zaytuna College, the first accredited Muslim liberal arts college in the U.S. He is also co-founder and National Chair of American Muslims for Palestine (AMP), lecturer on Near Eastern Studies and Asian American Studies at UC Berkeley, and Executive Director of the Islamophobia Studies Center and Editor of the Islamophobia Studies Journal.

Ata Manasra, Coordinator of Narjes Community Development Committee in the West Bank village of Wadi Foquin will also join us to provide an update on land confiscation in the village and current efforts to stop this annexation.  Manasra is the liaison from the village to the Friends of Wadi Foquin and is also a professional tour guide.


Join us on July 10th, at 10:00 am (PT) / 1:00pm (ET) for this highly informative macro and micro look at the Israeli settlements enterprise, the keystone of the Israeli occupation.

Michael Yoshii serves as Chair, Nominating Committee with the Conference Claimants Endowment Board.