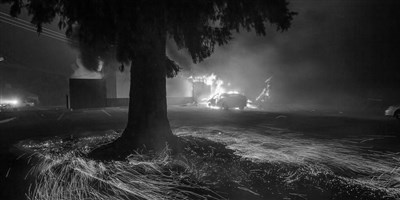 Bishop Minerva G. Carcaño’s formal request for a $10,000 grant to help the California-Nevada Annual Conference meet immediate needs of Camp Fire survivors has been approved by the United Methodist Committee on Relief (UMCOR).

Cathy Earl, UMCOR’s Director of Disaster Response and U.S. Partner Relations, responded to the request with the following message:

“It is with a mix of gratitude and shared sorrow that we join you in the efforts your conference is making to be hope for those who are grieving the devastating effects of ravaging wildfires. UMCOR stands alongside you going forward as you identify the next steps you will take to support recovery. UMCOR has approved your request for a solidarity grant of $10,000.”

The bishop expressed her gratitude and added, “We have no stronger Connectional partner than UMCOR.”

She said the funds will be used to help facilitate the replacement of personal clothing items and food through various resources.

The Conference Director of Disaster Response Ministry, Sonja Edd-Bennett, continues to work closely with state response agencies and the NorCal Voluntary Organizations Active in Disaster (VOAD) to coordinate Cal-Nevada’s efforts. She is hosting twice-weekly (at least) conference calls for the sharing of information regarding needs and responses.

Leslie Carmichael, the conference’s Early Response Team (ERT) Coordinator, has requested buckets, hygiene kits, and school kits from UMCOR and those are scheduled to arrive this week. She is also alerting ERT members to be ready to work in the Local Assistance Center, once it is up and running – which may happen by Friday, according to the California Office of Emergency Services (Cal OES). Those volunteers will provide intake and identify potential short-term projects in which United Methodists from throughout the conference could participate.

The bishop says Rev. Toni Hartman, pastor of Yreka United Methodist Church in Yreka, California is providing spiritual and emotional care to those who have lost loved ones, and also will help assess unmet needs and how the conference can provide support in new ways. Hartman is a trained chaplain who has assisted in disasters such as Texas hurricane recovery.

The Camp Fire has been officially designated the deadliest in California history: There have been 42 fatalities as of Nov. 13 and, with 228 still missing, the death toll is expected to rise.

It has been identified as unique in a number of other ways, too.

“We have not had an event of this magnitude before,” Lydia Armas of Cal OES said on the Nov. 12 VOAD conference call. Although other fires have consumed more buildings, she explained, the destruction has never before been concentrated in the way that it was here.

In addition, since Paradise, California – which was 90% destroyed – was largely known as a retirement community, the “high level of people with disabilities [and] a tremendously large senior citizen population” produces a different set of needs, requiring “outside the box” strategies, noted Vance Taylor, Chief of the Office of Access and Functional Needs at Cal OES.

Even seniors who were living independently have, in many cases, lost medical equipment and personal care items, he said. In addition, many of the Personal Care Attendants have also been affected by the fires and are no longer able to provide support to their clients.

“It’s going to be a much larger lift than we’re accustomed to; than we’ve ever faced before,” Taylor said.

Volunteer agencies also realize that the number of evacuees and degree of devastation requires a change in thinking regarding meeting housing needs – and not only in the long-term recovery.

“We anticipate sheltering could be of longer duration than usual,” Patricia Davis of the Red Cross reported to NorCal VOAD. Nine shelters are open in the area, accommodating around 1,281 people (including campers outside), according to the California Department of Social Services.

The Red Cross has deployed 305 volunteers to the region and is focused on trying to meet immediate needs – dormitory, feeding, healthcare, and mental health needs. Davis said the organization is “scrutinizing” how to resource an “inordinately high population of children out of school – in the thousands.”

Bishop Carcaño acknowledges that the situation is unprecedented and calls for new strategies. “We realize we may need to respond differently than in the past,” she says. “The state and VOAD are considering what we do when an entire town is destroyed, down to its infrastructure.”

All three United Methodist pastors in the area lost their homes in the Camp Fire, as did many first responders, but escaped the inferno with their families. Great Northern District Superintendent Blake Busick reports that it has been confirmed, now, that Paradise UMC has survived the fire – although its condition is unknown. The church’s pastor, Rev. Bob Chicou, plans to gather his congregation in Chico to worship together this Sunday afternoon. We will provide details as soon as they become available.

Meanwhile, the Camp Fire still is only 30% contained. As of Nov. 13 it had consumed 125,000 acres, destroying 6,522 homes and 260 commercial properties, and still threatened 15,500 other structures. 52,700 persons in 25,500 households remain under evacuation orders, including all residents of the city of Paradise. Authorities say they will not lift the order until it’s safe for residents to return.