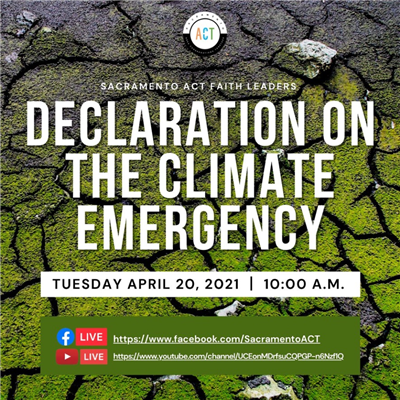 “Nobody wants to be here decrying what is going on—declaring a climate emergency,” stated Pastor Mary Westfall, board member of the Sacramento Area Congregations Together (SacAct) and Executive Director for the regional Presbyterian Churches in North Central California. “But to do anything other would be disingenuous…now is the time and we are the ones—we cannot delay this work any longer.”

In anticipation of Earth Day, SacAct held a press conference on Facebook Live and YouTube Live on Tuesday, April 20, 2021 to present a statement of Declaration of Climate Emergency. The statement was read aloud by Rev. Lucy Bunch of the Unitarian Universalist Society of Sacramento.

One of several panelists during the press conference included Rev. Rod Brayfindley, pastor of First United Methodist Church in Sacramento. Brayfindley is a member of SacAct and serves on the Climate Justice sub-committee which organized the event headed by Executive Director Gabby Trejo.

“This is a powerful witness, and we need to hear,” stated Brayfindley who thanked each speaker for their participation. “To love one another and to love God is certainly not to be in rebellion, to affront the entire creation. This is despicable, what we have allowed to happen; is a grave emergency, a great emergency and an urgent cause for us to attend to.”

“We need to fall back in love with the creation—in concrete terms, ” explained Brayfindley. “…that means for our congregations: responsible activity for our building and our uses and also of our consuming. It means engaging people at a political level because 80 percent of the reason we’re having the massive carbon emission problem that we have is corporate and not individual and at the same time, we as individuals need to act ourselves. This is a moral call and morality is stuff of the faith language as much as connection to God. So, it is our time, and it is extremely important.”

Brayfindley introduced California State Senators Scott Wiener and Henry Stern noting that the two men have worked for senate bills that “have been resisted to the point that they need our voices, they need our support.”

The senators pledged their support in tangible ways at the state government level including working for sustainable land use patterns, reducing dependence on oil and stopping harmful oil extraction practices, and forcing corporations to disclose their carbon footprints and climate risk.

“These are times where the easy thing to do is sit quietly in your station and avoid the conflict,” stated Senator Stern commending the group for their activism. “I am humbled by the depth of knowledge and bravery it takes to put yourselves forward as a Reverend or a Rabbi, Imam or a Pastor … know that you have great moral weight--and we need you in this moment.”
SacAct members include over 56 congregations, schools and neighborhood groups, representing 60,000 families in Sacramento County. SacAct is a multi-racial, multi-faith organization advocating a transformation of the local community rooted in shared faith values and equipping ordinary people to effectively identify and change conditions to create justice and equity. SacAct is affiliated with Faith in Action https://faithinaction.org and PICO of California http://www.picocalifornia.org